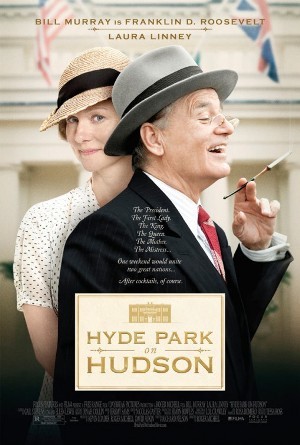 Hyde Park on Hudson is a 2012 film based on the play of the same name, starring Bill Murray as President Franklin D. Roosevelt and Laura Linney as his mistress, Margaret "Daisy" Suckley.

The film is set in the 1930s in the Hudson Valley region where Daisy is called to meet with her distant cousin, Franklin Roosevelt, who prefers to work at his mother's house in the summer, to help him relax from his demanding job. They soon become lovers.

Eventually, the relationship is put to the test in 1939 when Roosevelt receives King George VI of Britain and Queen Elizabeth for a visit on the first ever North American tour for a British monarch. Once there, the underconfident king, whose stammer seems to be acting up after years of speech therapy, has considerable trepidations about getting along with the President and the American oddities and slights that seem to bombard him.

Likewise, Daisy has her own problems when she tries to stay out the way for the auspicious occasion, but an impulsive act leads to a heartbreaking discovery about Roosevelt. Now, Daisy must decide on whether her own concerns matter that much compared to the weighty issues that the President must handle.