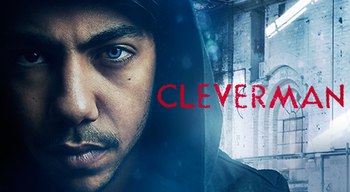 Dream on.
The Aboriginal people of Australia are the longest surviving culture on earth with over 60,000 years of stories known as The Dreaming.

The Dreaming is a spiritual realm that binds the past, present and future together. It is inhabited by incredible creatures and spirits.

At the head of this realm is the Cleverman, a powerful man who is the conduit between The Dreaming and the real world.
—Opening title cards (in the US broadcast only)
Advertisement:

Cleverman is an Australian TV series co-produced with New Zealand and the United States, starring Hunter Page-Lochard, Deborah Mailman, Frances O'Connor and Iain Glen. The show was created by Ryan Griffen, who wanted to create an Aboriginal superhero for his son, and draws heavily from the mythology of the Indigenous Australians. Cleverman is broadcast simultaneously on the ABC in Australia and Sundance in the United States.

In a dystopic alternate version of Australia, "Hairypeople" — strong, long-lived humanoid creatures with a connection to the Dreaming — are rounded up by the government and forced to live in squalor in an area called "the Zone" alongside the poorest and neediest humans. Koen West, an amoral bar owner in the Zone who has turned his back on his culture, is anointed the new Cleverman after the death of his Uncle Jimmy. With new supernatural abilities and the help of his brother Waruu, a community leader who expected to be the new Cleverman, Koen must face threats to his people and the political forces encroaching on the Zone.