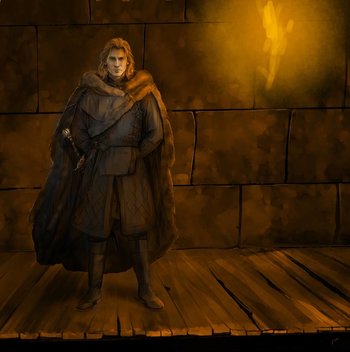 .
Night gathers, and now my watch begins. It shall not end until my death. I shall take no wife, hold no lands, father no children. I shall wear no crowns and win no glory. I shall live and die at my post. I am the sword in the darkness. I am the watcher on the walls. I am the fire that burns against the cold, the light that brings the dawn, the horn that wakes the sleepers, the shield that guards the realms of men. I pledge my life and honor to the Night’s Watch, for this night and all the nights to come.
Advertisement:
“It’s the last line I best like. My life and honor. At the Wall, honor is another thing it’s admirable to give in defense of the realm, just as men are hailed for giving their lives in battle. By the standards of these oaths, I made the right choice in King’s Landing. There are not words, for how much that matters.”
— Jaime Lannister

. Can be viewed here

The story is an AU diverging at the end of Robert's Rebellion. After killing the Mad King Aerys, breaking his vows as his Kingsguard to save King's Landing, instead of being left off the hook to please Tywin Lannister, Jaime is instead forced to take the black. Partly to stop his father from restarting the war, and partly out of spite towards Ned Stark, Jaime accepts his punishment.

A life of tedium and misery seemingly awaits him, but he acclimates surprisingly well and finds an unlikely friend in Mance Rayder, which makes him realize the world doesn't end at the Wall and he can build a new life here. His new role also makes him question and think more deeply about the common Westerosi perceptions of honor, and seek his own definition of it.

But peace does not last forever, and very soon, Jaime and his new brothers have to face an otherwordly threat mounting far to the north...

Life and Honor contains examples of: