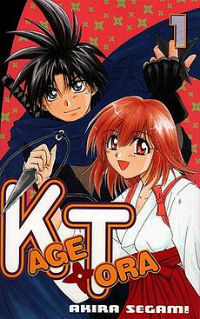 A Ninja and his master.

In modern day Japan, Kagetora is a young ninja with a "duty". His current master offers a new duty, something he is not familiar with at all. Instead, of the usual bodyguard duty, he is the martial arts instructor of his master's daughter, Yuki. Being both her protector and instructor, Kagetora trains the "Hime" Yuki. Unfortunately, for Kagetora Yuki is not only cute but also very inept at martial arts. Nevertheless Kagetora decides to complete his duty, despite her distractions. Very early on in the series, Kagetora falls in love with Yuki. Of course, this is a problem.