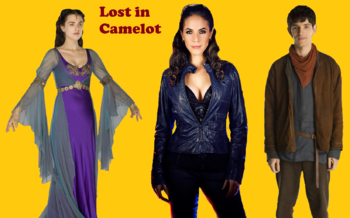 is a crossover between Lost Girl and Merlin (starting mid-season Two for Lost Girl and early season Two for Merlin). Starting as Bo finds herself drunk and depressed over Dyson and Lauren having moved on to other partners, she is confronted by a mysterious old man while staggering home, the man sobering her up and teleporting her away saying that he is sending her ‘home’, just as Kenzi follows Bo and gets caught up in the spell. The two find themselves in a forest, and are eventually ‘rescued’ by Arthur and Merlin, forcing the two women to present themselves as displaced noblewomen who were abducted by a sorcerer. As they adjust to life in Camelot, Bo forms a particularly close friendship with Morgana, while Merlin learns of her true nature and makes arrangements to help her cope with her need to feed on chi. As time goes on, these relationships develop into a complex romantic attraction between all three, while secrets of Bo’s past lead her and Kenzi to make a new life in Camelot.

The author has confirmed that this will be a three-part series (Although only the first part has been written so far); Lost in Camelot

Lost in Camelot contains examples of: