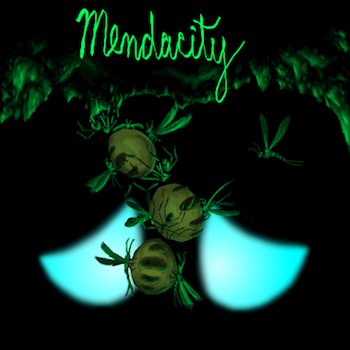 Bon Bon's voice is funny, and that's about all that anypony who meets her notices, as her marefriend Lyra soon steals the spotlight with her explosive personality, strange obsessions, and curious beliefs. And why not? Bon Bon is, after all, a perfectly ordinary, boring pony in every way but two: her voice, and the carefully kept secret that she isn't really a pony.
Advertisement:

Mendacity is a My Little Pony: Friendship Is Magic Fan Fic by Dromicosuchus. It can be read here

. It retells the story of "A Canterlot Wedding" from the point of view of beloved background characters Lyra and Bon Bon.