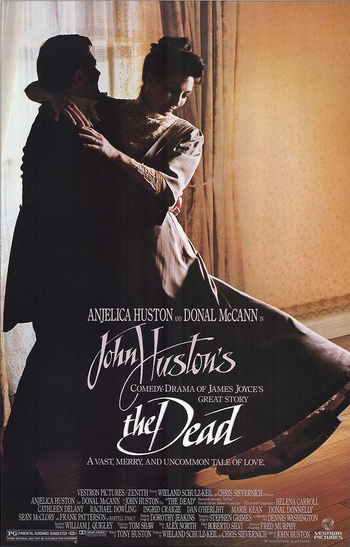 "One by one, we're all becoming shades."
Advertisement:

The Dead is the final film directed by John Huston, released in 1987. It is an adaptation of the last story in James Joyce's short story collection Dubliners.

Two Maiden Aunts, Julia and Kate Merkan, are hosting their annual Epiphany party, January 6, 1904. Their extended family has come for a night of dancing and entertainment followed by a feast. Among their guests are Gabriel Conroy and his wife Gretta (Anjelica Huston, John's daughter). Gabriel and Gretta are a respectable upper-class married couple, seemingly perfectly ordinary. But before the night is over some hidden truths will be revealed.

The last film directed by John Huston, who was very ill with emphysema and in fact died four months before the film was released. Colm Meaney has a small role as a party guest.