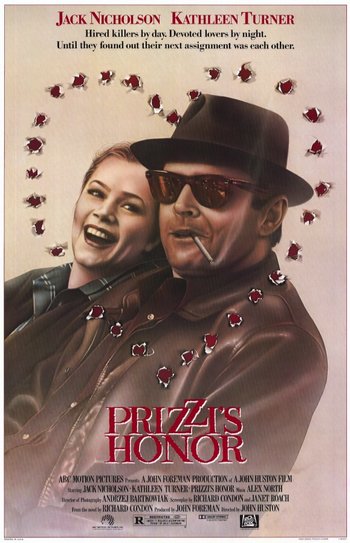 "Do I ice her? Do I marry her?"'
—Charley Partanna
Advertisement:

Prizzi's Honor is a 1985 film based on a 1982 novel by Richard Condon. Directed by John Huston, the film stars Jack Nicholson, Kathleen Turner, Robert Loggia, and Anjelica Huston, who won an Academy Award for her performance.

Charley Partanna (Nicholson) is a hit-man for the Prizzi crime family. One day, at a wedding, he meets Irene Walker (Turner), who's also a hit-woman. Charley inadvertently kills her husband, and after a courtship, he marries her. However, Irene has been keeping money her late ex-husband stole from the mob. The Prizzis then hire the two of them to take out each other. But neither knows the other's true identity.