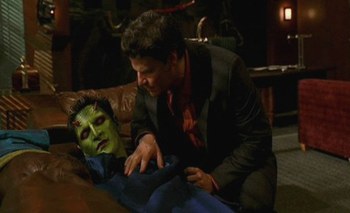 As Halloween approached, Lorne threw a Halloween party for all the firm's clients and employees and even got a reluctant Angel to invite a powerful demon lord, named Archduke Sebassis, to the party. Other guests included the Fell Brethren, the Britzai Clan, Devlin, and a Thraxis Demon. During the gathering, Lorne's timely advice to his friends started happening literally. Winifred Burkle and Wesley Wyndam-Pryce got drunk after Lorne told them that their problem was that they were sober, and should be "three-sheets to the wind" already. Charles Gunn embarrassingly began relieving himself around the building after Lorne told him to "mark his territory." Angel and Eve had sex after Lorne told them to "get a room" due to the sexual tension he could sense. Finally, Spike began enjoying himself dancing, listening to the music, and becoming overly happy and agreeable once Lorne told him to "be a little more positive."

There was more trouble when Lorne's sleep deprivation caused his empathic subconscious to manifest itself as a hulking demon. The deprivation itself was the result of Lorne having Wolfram & Hart remove his ability to sleep entirely, just like Madeline Chu in accounting. Lorne's subconscious caused much violence before the gang restored Lorne's sleep, which neutralized the manifestation.

The chaos and destruction had a positive side, since most of Wolfram & Hart's employees felt that it made the party much better.