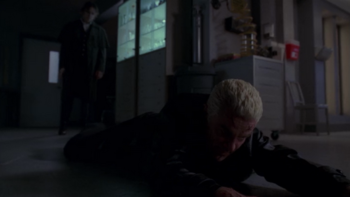 Fred is working late in the science lab and Spike pops up. After faking being scared, Fred admits that she knew he'd followed her there from the lobby. Spike says that he's a pathetic ghost, since he can't pick things up and scare people. Fred argues that he's not a ghost, then notes that the temperature of the heat he radiates has dropped slightly. She promises again that she won't let him stay in the netherworld and will make him "as real as a vampire with a soul can be." Fred says if she can defy some laws of nature, she may be able to make Spike corporeal again and keep him in this world. Spike disappears, winding up in the basement, where he hears a chopping sound and goes to investigate. He finds a man with a cut-up face chopping off his own fingers; he does a double take and the man disappears.

Elsewhere in the building, Lorne negotiates a deal as he passes Fred. Fred heads to Wesley's office and requests some books. He tells her that he'll get them for her if she agrees to have a real dinner, since she's been frequently eating takeout and working late. Eve takes Fred to Angel's office, where they discuss the amount of money Fred's department has been spending. Fred admits that she has to spend a lot to try to make Spike corporeal again; Angel says that he asked her to try to get him out of Wolfram & Hart. She reminds him that they were supposed to take over the firm to do good, but, of course, Angel says that that has nothing to do with Spike. Fred says that Spike is a champion, like Angel, but Angel has tired of the word "champion". She thinks that Spike would fight on their side if he could; Angel disagrees. He adds that the second he can, Spike is going to run off to Buffy and he refuses to let that happen. She is annoyed with his petty jealousy towards Spike over Buffy and finds his reasoning unfair and selfish. Fred assures him that she's immune to Spike's charms — she just wants to help him. Angel replies that some people can't be saved.

Spike reappears in the lab and notices a buzzing lamp and a looming shadow. As he heads down a hallway, the lights start going out and he hears a woman crying. He encounters a woman from the 19th century without arms; she disappears like the fingerless man. Upstairs, Spike meets up with Angel, who thinks that Spike is starting to feel how close he is to Hell. Spike says that it can't be a big deal, since Angel managed to escape, but Angel says that he didn't, he just got a reprieve. Spike says that Fred told him about the Shanshu Prophecy, which Angel says isn't real because there's no such thing as destiny. He thinks that the evil things they did in the past are the only things that will wind up mattering. Spike asks why they should even bother to try to make good and Angel rhetorically asks what else they would do. Spike resigns himself to being Angel's sidekick and Angel tries to get rid of him again. They banter a little and then Angel finally admits that he liked Spike's poems. "You like Barry Manilow," Spike reminds him. He suddenly sees a man hanging from the ceiling and realizes that Angel doesn't see him.

Later, Angel, Spike, Wesley, and Fred meet up in Angel's office, where Spike tries to get the ghosts to go away. Gunn and Eve arrive and announce that, according to the building's "spectral sweeps", there are no ghosts. The ghosts tell Spike that something is coming as Spike begs Fred to do something to get rid of them. He disappears, then reappears, but no one can see him. The gang head off to look for Spike as a ghost tells him that no one can help him now. Spike spots the shadow from the lab again and follows it to the elevator, which starts moving on its own. Wesley, Gunn, and Fred head to Wesley's office, where they wonder if Spike is going crazy. Fred says that "he's slipping into Hell." The elevator takes Spike to the basement, where ghosts tell him that the Reaper is coming for him. A woman with glass in her eye takes out a shard, says, "Haven't forgotten you," and cuts his cheek.

Up in the lab, Fred works on equations and is joined by Spike, who says that Hell is coming for him. He thanks her for trying to help him, despite the fact that she can't hear him. He tries to touch her to encourage her; she feels a spark and determines that he's there. Angel arrives and Fred tells him that she thinks Spike is there. He replies that the mystics did another sweep of the building and didn't find anything. Fred says she doesn't care and wants to figure out how to contact Spike before he's gone for good. The two of them meet up with Gunn and Wesley in a conference room, where they're joined by Eve and Claire, a psychic. The psychic conducts a quick seance, where she senses Spike's presence and says that he's in pain. She says that a "dark soul" is coming and Spike yells that it's the Reaper. The psychic starts choking and Angel thinks that Spike is attacking her. The psychic composes herself and appears to be okay, but then she explodes. Later, Wesley says that Spike wouldn't gain anything from killing someone who was trying to help him; she must have contacted the "dark soul" she said was coming.

As Fred showers in the lab, Spike wonders why the Reaper killed the psychic; he decides that it was trying to hide something. He reaches out and manages to touch the glass on the shower. He concentrates, writing something on the glass, and when Fred's done, she sees "REAPER" written on the glass. Suddenly, the glass shatters and Spike is yanked through a wall into the lobby. There, he's harassed by more ghosts and demands to see the Reaper himself. The Reaper appears and says that he's going to torture Spike. Up in Wesley's office, Gunn finds information on the "dark soul," but there are a lot of references to different people (four about Angel, who resents it because he didn't have a soul when he did them). Fred arrives and tells the others to cross-reference "reaper." Angel comes up with the name Matthias Pavayne, an 18th century doctor nicknamed the Reaper for performing unnecessary surgery. Rather than praising him for being brutal, Wolfram & Hart killed him and used his blood to deconsecrate the ground of the L.A. branch; the site the seers had determined would work was originally a church, so Pavayne's blood was needed.

Angel notes that Pavayne practiced the dark arts, which is probably why he's not in Hell and can get around the mystics. Angel wonders why there aren't any ghosts in the building, since so many people have died there. Gunn says that Pavayne must be doing something to them, and Fred notes that Spike will probably be his next victim. Down in the science lab, Pavayne is having fun torturing Spike. Fred enters and Pavayne hopes that some day he'll get to deal with her. Spike tries to hit him, but he's still non-corporeal, so it doesn't work. Spike and Pavayne wind up in the basement, where Pavayne brags that he can bend reality, which is why the gang can't see Spike anymore. Pavayne and the ghosts taunt Spike, who says that Pavayne killed them all. Pavayne says that they died in service to the firm, but Spike says that he sent them to Hell, which means they're not really in the world.

In the lab, Fred writes formulas on the windows; the others note that that's not a good sign and she assures them that she's not crazy, she just ran out of room on her whiteboard. Angel decides that they'll try to get Spike first, then deal with Pavayne. Fred says that in order to save Spike, they need a lot of dark energy. Gunn takes Angel to the white room, where Angel expositions that Gunn wants to take something from the conduit between Wolfram & Hart and other dimensions. They hear the panther from the White Room and Gunn speaks to it calmly, eventually making a deal when it appears. Back in the basement, Pavayne continues torturing Spike and opens a portal to Hell. He says that he's sending Spike there so that he himself can stay in this world. He tells Spike that he's getting what he deserves; Spike agrees that he deserves to go to Hell, but not today. As Spike starts fighting back, he notes that since reality bends to desire, he could touch Fred and write on the glass because he wanted to. And right now, more than anything, he wants to kick Pavayne's ass. Spike starts hitting Pavayne, and they wind up in Angel's office; Pavayne fights back, appearing to enjoy himself.

The group meet up in the science lab again and Gunn gives Fred what he took from the panther. Fred does her thing as Spike and Pavayne keep fighting each other. They get distracted by an energy burst and Spike runs away. In the lab, Fred determines that Spike is there and tells him to step into a circle she's drawn so that he can become corporeal again. Pavayne grabs her and starts choking her. The others figure it out and try to fight him, but he knocks them across the room. Pavayne notes that Spike can choose to become corporeal or he can save Fred. Spike appears beside him and knocks him into the circle, where Pavayne becomes corporeal. Angel starts fighting him and Spike, now visible to the gang, tells him not to kill Pavayne so he won't become a spirit again. Angel is fine with just beating him up a lot.

The next day, Wesley and Gunn help Fred clean up the lab and try to make sure she's okay. Spike appears in Fred's office and she apologizes for being unable to do the ritual again to make him corporeal. He says that he's all right — he made the choice to save her instead and wouldn't change his mind. He's afraid of trying something else and winding up like Pavayne, who cheated death any way he could no matter who it hurt. Fred says what she told everyone else was right — Spike was worth saving. Spike shows off his ability to bend reality to his desire by picking up a coffee mug, reflecting that there are worse things than being a ghost. In the basement, Angel and Eve make sure that Pavayne is imprisoned in a device where he can't move or affect anything around him, but will remain alive for all eternity, staring at a brick wall all day through the window in his door. "Welcome to Hell," Angel tells him.