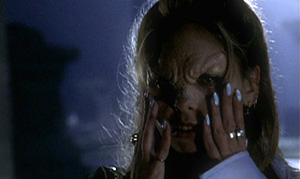 "Our dreams are coming true?"
(scoffs) "Dreams? That would be a musical comedy version of this."
Xander and Giles
Advertisement:

Buffy patrols Sunnydale's underground. As she rounds a bend in the sewer, she comes across the Master's lair. The Slayer whirls around, and stares into the eyes of the vampire king. Captivated by him, Buffy's stake clatters uselessly to the floor. The Master leans in to taste his prey, as Buffy screams. "NO!"

Her eyes snap open. She's snug in her own bed. Phew. Joyce informs Buffy that her father called, and their weekend plans are still on.

At school that morning, Buffy is startled to see a sad looking young boy, watching her from the doorway. The teacher asks a student, Wendell, to read a passage from the text. He opens his copy, and several large tarantulas scuttle out of it. The young boy calmly observes the panicked class.

Advertisement:
"Sorry about that."

The Scoobies find Wendell in quad sitting alone. Wendell reveals that he actually loves spiders, but his own pet spiders died when his brother left a heat lamp on too long. Since then, Wendell's had a recurring nightmare about them. He thought he was dreaming again in class, but then everyone else started screaming too. Meanwhile, a girl ducks into the basement for a quick smoke break. From the shadows, a grotesque demon watches as she lights up, then starts attacking her with his deformed, club like arm.

In the hospital, Buffy and Giles bring flowers to the victim (Laura), who looks like ten miles of bad road. Laura remembers that the monster said "Lucky nineteen," right before the attack. Laura's doctor tells them that there was another victim — a small boy — whose attacker has the same M.O. But that one is in a coma.

In the library, Buffy glances down at a newspaper and recognizes the kid from earlier. He's Billy, a twelve year old who was beaten unconscious after a little league baseball game. Giles thinks that Billy might be using some form of astral projection to move around town. Buffy notices that Billy's baseball uniform displays the number 19. A clue! Buffy's dad Hank pops in. She wonders why he's there early, and Hank says he needs to talk to her in private. As they take a seat on a outdoor bench, Hank tells her she is old enough to hear the truth: Buffy is a total embarrassment as a daughter and the root cause of his divorce from Joyce. Speaking of which, Hank doesn't really "get anything" out of these shared custody visits, so he pats her knee and rises without even a goodbye. Buffy, grief-stricken, looks up and notices the coma victim, Billy, staring at her from a doorway. She hounds him into the gym, but the Ugly Man reappears. Buffy fights back, but he's too tough for the Slayer. Billy rushes out of the gym and Buffy follows, limping.

The gang finally puts the pieces together and realizes that everyone's nightmares are coming true. And given the subject matter of a Slayer's dreams, it's pretty imperative that they find Buffy right now. Meanwhile, Buffy suddenly finds herself in a cemetery at night. The Master appears, ready to bury her alive. He throws her into a freshly-dug grave, slamming the coffin lid shut.

Outside the school, pandemonium is breaking out as police sirens wail. Willow sees a portal to a graveyard across the street. They walk over to it and face Giles' nightmare: Buffy's tombstone. Giles sinks to his knees, beside himself. A hand reaches out and grabs his wrist! Buffy climbs out of the dirt, brushing herself off. Oh, and another thing: She's vamped. Giles tells her that he believes if they can awaken Billy, reality will shift back to normal. Buffy's shaken, but not stirred.

Chaos reigns in the hospital. Giles tries to rattle Billy awake. "That won't work," a child says. Giles looks up to see Billy's astral body standing nearby. Giles pleads with him to wake up, but the child tells him he has to hide from the Ugly Man. That does it; Buffy steps out into the hall to face the brute. Armed with the combined power of the Slayer and the vampire, she's finally able to overpower him. He slumps to the ground, stunned. Buffy tells Billy that he has to finish it: he must face his fear. Billy walks hesitantly to the Ugly Man and peels back his face, restoring reality.

Back in the real world, Xander notices Billy's eyes fluttering, and he smiles as the child awakens. Giles is about to get a doctor, when Billy's baseball coach enters, calling Billy his "Lucky nineteen". Buffy and the gang realize that the coach is the culprit. Book 'em, Danno.

Back at school, Hank drives up, honking for Buffy. She's delighted, realizing her nightmare about her father was just that; Hank is just as thrilled to see Buffy as she is to see him. They hug tightly and walk to the car, as he asks about her day.