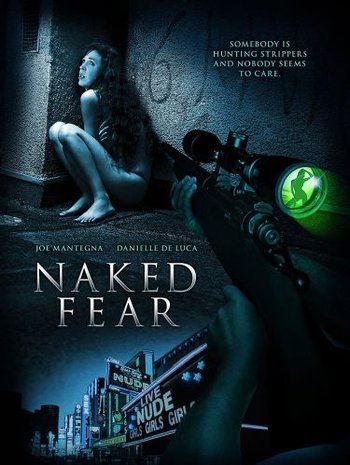 Naked Fear is a 2007 live-action thriller, written by Christine Vasquez and directed by Thom Eberhardt.

Diana Kelper (Danielle De Luca) is a young dancer who thinks she's hit it big when she wins a contest to perform at a nightclub in New Mexico. Unbeknownst to her, it's actually a trap to send its workers further into debt, until they are forced into prostitution. With no other choice, Diana solicits her first client... who happens to be none other than Colin Mandel (J.D. Garfield). Colin may look like a model citizen at first glance, but he has a sinister pastime — to kidnap women, strip them naked, set them out in the wilderness, and hunt them like animals.

Sure enough, Diana tries to back out at the last moment, but is knocked out by Colin, and eventually finds herself in the same predicament. With nothing but her wits on her, she must try to evade Colin and make it back to civilization alive.