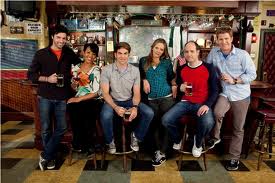 A 2006 TBS sitcom created by Betsy Thomas and featuring Jordana Spiro as P.J. Franklin, a female sports writer making a name for herself in an industry full of men. She is definitely One of the Guys and has more male friends than female. In narration she takes sports terminology and applies it towards her relationships with her male best friends Mike, Kenny, Brendan, Bobby and her married brother Andy (played by Jim Gaffigan). She also has heart to heart conversations with female best friend Stephanie, goes sporting events/debates and tries to figure out the Chicago dating scene.