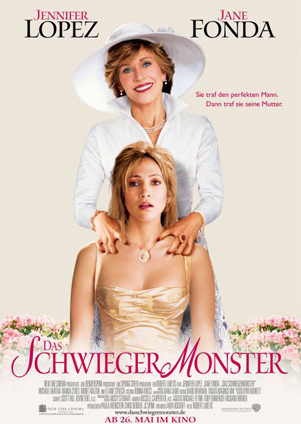 Monster-in-Law is a 2005 romantic comedy film directed by Robert Luketic.

Charlie Cantilini (Jennifer Lopez) has just met the perfect man, Kevin Fields (Michael Vartan), a brillant surgeon and son of the legendary Viola Fields (Jane Fonda). She loves him, he loves her, perfect! They should totally get married!

Well, except Viola doesn't quite think so. She has some issues with Charlie and would like to have a say in their relationship, much Hilarity Ensues.

The film marks the much awaited return of Jane Fonda to cinema, but at the same times, seems to suffer from the Love It or Be Bored By It syndrome. On one hand, it can be seen as slow-paced, predictable and rather cliched. But nevertheless, the well-executed comedy of this short little film will likely bring a smile to your face anyway. Remember, always trust Wanda Sykes to brighten up your day.