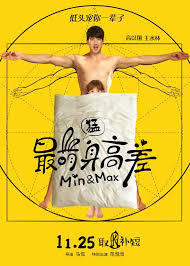 Xia Xiling, nicknamed Min due to her short height, is a college student who is dating a friend of hers nicknamed "Mr. Rabbit", who is currently studying in the United States. She meets a boy named Zhang Xiao, a postgraduate majoring in photography who comes off as rather perverted and is significantly taller than she is, thus beginning the story of the 2016 Chinese romantic comedy movie Min & Max.

Min keeps running into Zhang Xiao, who ends up falling in love with her and tries to win her over, but Min keeps rejecting him. Eventually, however, Min actually starts to develop feelings for Zhang Xiao... which, of course, is quite a problem considering she's already dating Mr. Rabbit. This, plus the fact that one of her friends, Miss Black, has a crush on Zhang Xiao and doesn't want Min to keep hanging around him. Will Min ever find a way to resolve this romantic ruckus?

Has absolutely nothing to do with Min-Maxing.