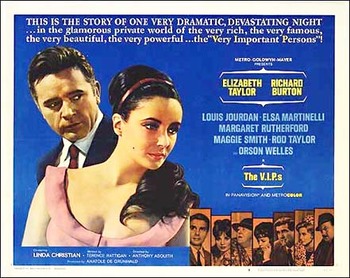 The V.I.P.s is a 1963 film directed by Anthony Asquith.note Son of Herbert Henry Asquith.

It is a Grand Hotel-style movie centering around a bunch of first-class passengers at Heathrow Airport, seeking to take a flight to New York. They include:

Bascially, everybody except for the duchess is under time pressure to get to New York. So they are not happy when Heathrow is socked in by fog and their flight is grounded, leading them stranded at the airport.

The first of eleven films co-starring Richard Burton and Elizabeth Taylor; actually produced after Cleopatra, but due to that Epic Movie's Troubled Production, this one hit screens first. Miklós Rózsa composed the score. Supposedly the Frances-Paul-Marc storyline was inspired by a Real Life incident in which Vivien Leigh attempted to run away with her lover Peter Finch, only for her husband Laurence Olivier to chase her down and bring her home when the flight was delayed by fog.