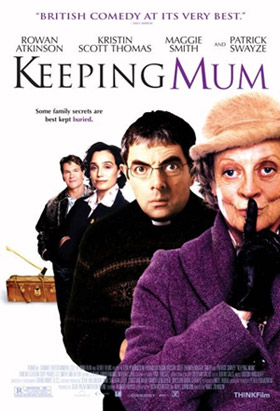 Keeping Mum is a 2005 British Black Comedy starring Rowan Atkinson, Patrick Swayze, Maggie Smith and Kristin Scott Thomas. In it the Goodfellow family is starting to fall on hard times; Walter Goodfellow (Atkinson), a vicar, is obsessing over writing the perfect sermon. His neglected wife Gloria is beginning an affair. Daughter Holly is bringing home increasingly unsuitable boyfriends while son Petey is bullied by his classmates.

And then, like Mary Poppins floating down from the sky, Grace Hawkins appears to set things right. Only instead of machiavellian schemes worthy of Jeeves her main strategy involves murder.