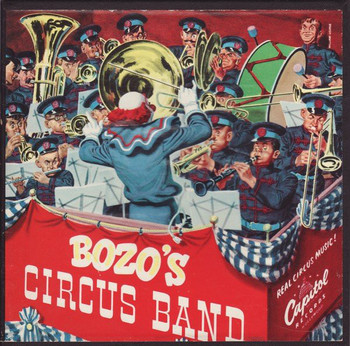 So if we play loud, people might think we're good! Everybody ready? And a one, and a two, and a one two three four-
Welcome everybody!
Step right up and join us at the circus
There's a lot to do and see you've never seen before
(Hooray!)
Everyone is welcome at the circus
Get ready for the show!
—"Welcome to the Circus/Time to Start the Show", LazyTown, "The LazyTown Circus"
Advertisement:

comes in a few recognizable styles. It may be a march played by a brass band, or a cheerful ditty on a calliope

, or a sweeping waltz. These styles all used to create a fun and welcome atmosphere at the greatest show(s) on earth. Even music that doesn't exactly fit one of these styles can be used as circus music as long as it keeps that fun, bouncy spirit in some way.

But then, eventually the Monster Clown and Circus of Fear became popular, and that led to Creepy Circus Music — circus music distorted, played in a minor key, or otherwise altered from traditional circus music to make it scary.

Despite that, traditionally happy circus music is still common in fiction. It makes great background music for circus or carnival settings (or an extended slapstick sequence). That's what this trope is for.

Basically, this trope is to Creepy Circus Music what Non-Ironic Clown is to Monster Clown.

Please note that even circus music that's in a major key or has a "traditionally" happy sound still counts as Creepy Circus Music if it's used in a scary context. See Soundtrack Dissonance. To count for this trope, the music has to be used in a genuinely happy and non-threatening context.

See also Standard Snippet, for tunes like "Entry of the Gladiators" (yes, that's the actual name of the song) and "Over the Waves" that are synonymous with circuses.

It's a show about an enchanted carousel, so it's only fitting that the opening theme is upbeat carnival music.

It's a show about an enchanted carousel, so it's only fitting that the opening theme is upbeat carnival music.