Theatre / The Comedy About A Bank Robbery 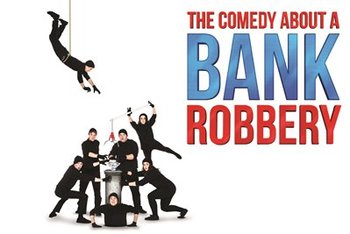 "It's like I always say; everyone in this town's a crook."
—Ruth Monaghan

The Comedy About a Bank Robbery is a caper play from Mischief Theatre, the team behind The Play That Goes Wrong and Peter Pan Goes Wrong. Unlike those plays, its humour does not come from mistakes in making the play, but it uses the theatre for comedy in other ways.

In Minneapolis, 1958, a priceless diamond belonging to the Crown Jewels of Hungary has been deposited for safe keeping in the City Bank. But convict Mitch Ruscitti, recently escaped from British Columbia Penitentiary, has his eyes on the diamond. Aiding him are his trickster girlfriend, a bent (and stupid) prison guard, and some guy he doesn't know. But this is a town where everyone's a crook.

The Comedy About a Bank Robbery contains examples of