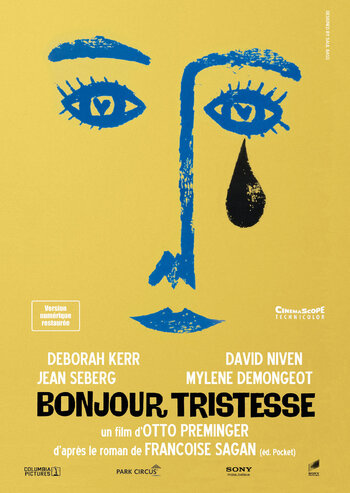 Bonjour Tristesse ("Hello Sadness") is a 1958 drama film directed by Otto Preminger, adapted by screenwriter Arthur Laurents from the 1954 novel of the same name by French author Françoise Sagan.

Cécile (Jean Seberg) is a jaded member of the European jet set, who lives an endless life of parties and dances and drinking with her father, Raymond (David Niven). Raymond regards his 17-year-old daughter with obvious affection but he treats her with an indulgence bordering on Parental Neglect. In fact Cécile seems to be less of a daughter to him than a sort of companion in his own life of drinking and debauchery; he does not care if she runs wild, drinks herself stupid, or flunks her college entrance exams.

Enter Anne (Deborah Kerr), a fashion designer. Raymond is the sort of cheerful cad who has no problem inviting a woman like Anne to spend time with him on the French Rivera while his previous girlfriend, Elsa (Mylène Demongeot), is still staying in the house. Anne, who has obvious feelings for Raymond, is taken aback to discover Elsa the hot blonde on the premises, but gamely rallies. Soon enough, as the attachment between Raymond and Anne deepens, an offended Elsa takes her leave. Not long after that, Anne and Raymond tell Cécile that they're getting engaged.

Cécile quite likes the life of hedonism and pleasure-seeking that she enjoys with her father, and is not too thrilled when Anne becomes a permanent presence, especially when Anne suggests that Cécile should actually study and go to school instead of flunking out and letting her boyfriend knock her up. Cécile devises a plan to break up Raymond and Anne's relationship, not anticipating the disastrous consequences of her action.