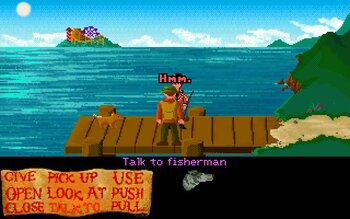 Cirque De Zale is a 2004 Adventure Game by Rebecca Clements. The game starts with a man named Alexander Zale, who works shovelling elephant dung at a circus. One day, Alex gets fed up with being bossed around by the circus's stage magician, the Great Astoundo, and decides to get his revenge by pranking the magician by putting dung in his hat. Understandably pissed, Astoundo reveals that he actually possesses real magic powers and decides to punish Alexander by banishing him to another dimension.

There, Alexander learns of an Evil Sorcerer who has kidnapped the king's daughter. The king makes a deal: if Alexander rescues his daughter and defeats the sorcerer, as foretold by prophecy, the royal wizard Jack will arrange to have Alexander returned to his home realm.

However, Alexander wants none of this, and just wants to stay in this strange new world and start his own circus. What follows is a story about destiny versus free will.

Cirque De Zale is freeware and can be downloaded here

. A full playthrough featuring commentary from Rebecca Clements can be found Here

Tropes found in this game