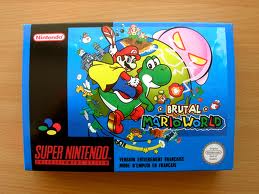 Three guesses as to the difference between this and the normal Super Mario World box. The first two don't count.
Advertisement:

One of the most well-known Super Mario World hacks. Made by the Japanese hacker "Carol", this hack's success comes from the fact that it contains many modifications that the vast majority of SMW hackers can't do, including new bosses, transition effects, new powers, and more. It's inspired many hackers to make their own custom bosses and ASM modifications.

The official game is available on SMWCentral here

, which has an unofficial English translation included. Both are listed as demos; therefore, they're incomplete. Since Carol himself is something of a hermit and can't speak English, updates travel through the forums via indirect word of mouth, so it's largely unknown what kind of progress has been made on completing it.

The unofficial story is that, prior to the hack's start, Mario finally killed Bowser once and for all and was made Mushroom King. However, the success got to his head and he became a very corrupt ruler. He was eventually overthrown, so you're playing the game as a Fallen Hero. (The official story is "Mario was hungry, so he went to Dinosaur Land to eat dinosaurs.")

This game is also commonly the source of debates, rumors, impersonations, and even fake demos on some ROM hacking communities due to its universal presence in those communities. However, people have gotten word that Carol continues to work on it to this day, though it may not be released for some time.

Changes from the original: