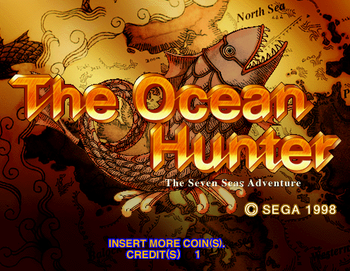 The seven seas spread throughout the world. It is said that there is a monster for each of these seven seas. Ships are being attacked one after another. Sharks gather around monsters seeking human flesh. The ocean is not only a place of blessing but a place of terror. Defeat the violent gigantic monsters of the seven seas. An enormous bounty has been set for their heads. Brave youth go out to face the monsters.
Advertisement:

The Ocean Hunter: The Seven Seas Adventure is a Light Gun Game released in arcades by Sega in 1998. Set in an Ocean Punk world where human civilization is being ravaged by terrifying sea monsters, you ply the seven seas with your trusty spear-gun seeking the bounties on these beasts' heads. While the oceans are swarming with all kinds of aquatic horrors, it is the Seven Great Monsters who are your greatest prize - and your deadliest challenge.

Tragically, the game was never ported to a home console, and is now extremely rare. It has been successfully emulated however.