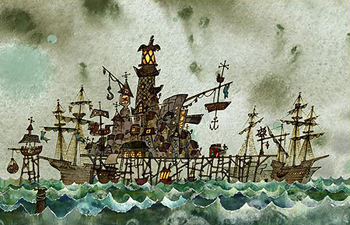 An Adventure-Friendly World, which, no matter how Technology Marches On, remains firmly rooted in the cultural and political sensibilities of the age of Wooden Ships and Iron Men.

Many works of modern fantasy or speculative fiction are set in a mostly watery world, or a mostly watery part of a world where the rest isn't of much matter, with distant islands connected by trade routes, ships sailing back and forth, different types of City on the Water, and mighty colonial nations vying for rulership of the oceans and seas. Regardless of type, these sort of settings are also an Ocean of Adventure rather more often than not.

Also often called Pirate Punk, as the setting naturally lends itself (but is by no means obliged) to have many Pirates and buccaneers, whether they're wielding cutlasses on sailing ships or the aquatic equivalent of Humongous Mecha.

May contain Organic Technology, and have a large focus on what happens under the waves, where there might be an Underwater City, as well as over. Fantastic elements based on old sailors' superstitions (mermaids, abandoned derelicts that often aren't so abandoned after all, giant sea monsters) also make a frequent appearance. Groups that are Born Under the Sail tend to be common, as is the occasional Moby Schtick.

This may also be a type of After the End Flooded Future World setting, if the writers are trying to teach An Aesop about global warming. Or they just thought it would be cool to show a world where our mostly land-based culture and technology ends up being adapted for an existence on the ocean.

For a similar setting that trades the water for the skies, see The Sky Is an Ocean, which will likely feature Sky Pirates. And since Space Is an Ocean, you might have Space Pirates. Compare and Contrast its exact opposite Desert Punk. Not to be confused with seapunk