Video Game / Of Light and Darkness 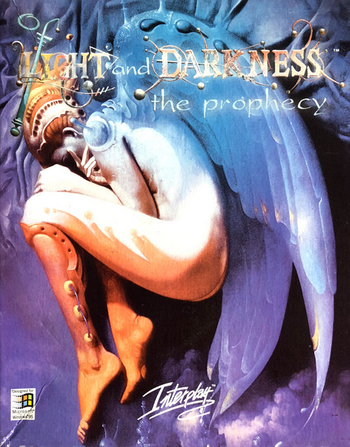 Of Light and Darkness: The Prophecy is a Point-and-Click Adventure Game, developed by Tribal Dreams and published by Interplay in 1998 for PCs. It was noteworthy for it's unique premise and all-star cast and "award-winning" team. The game was designed by Cliff Johnson (who previously worked on The Fool's Errand), written by Ken Melville (who worked on Sewer Shark), and starred big Hollywood actors Lolita Davidovich and James Woods, who provided voice lines and motion capture.
Advertisement:

Between the worlds of Light and Darkness, humans have struggled for nearly seven thousand years to put an end to the suffering. Once every thousand years, a gate opens between the waking world and the realm of dream time, offering the opportunity to create a new future for the next millennium. Six times in recorded human history this has occurred and The Prophets have said that life, as we know it, will end on May 5, 2000. You, The Chosen One, must rescue humanity from damnation, redeem the prophetess Angel and stop Gar Hob, The Dark Lord of the Seventh Millennium from plunging the world into a thousand years of darkness.

While the game was unique in it's own way, it quickly faded into obscurity... at least until December 2016, when it was finally re-released on GOG.com and Steam. A walkthrough of the game can also be found here