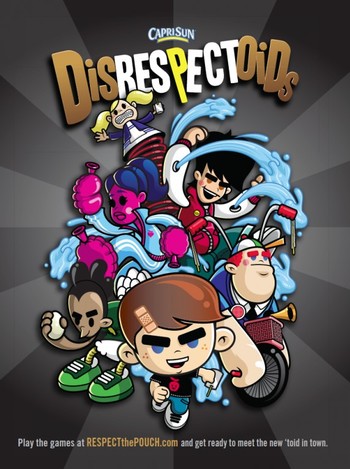 "Respect the Pouch" was an advertising campaign for Capri Sun juice pouches during the late 2000s and early 2010s.

Each commercial would follow a certain pattern. A kid would be drinking a pouch of Capri Sun and get an idea to destroy the pouch in a creative way. As soon as they damaged the pouch, however, they'd be swiftly punished, usually by transforming into something ironically tied to their actions. Each kid was deemed a "Disrespectoid" and given a name based on their new appearance. For example, a kid dubbed "Leaky Louie" poked holes all over his pouch, so he was cursed to forever leak liquids out of Invisible Holes in his body.

The campaign was successful due to its creative means of drawing attention to Capri Sun's distinct packaging, as well as introducing a wide variety of weird characters in the Disrespectoids. An official website soon followed, comprising character bios, games, and a short webseries featuring the Disrespectoids in animated form. The webseries can be watched here.