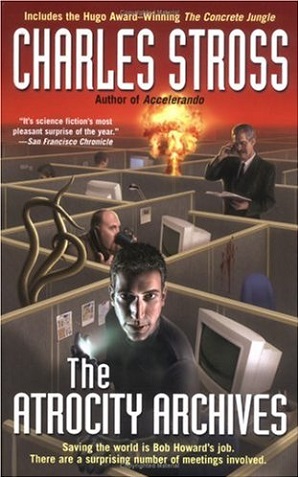 Bob Howard is an IT guy who stumbled across Secrets Man Is Not Yet Ready To Know. (Most such secrets turn out to involve advanced mathematics.) As a result, Bob has been recruited, willy-nilly, into the Laundry, a top-secret agency which protects the UK from occult threats. This is not as exciting as it might sound. Despite their unusual remit, the Laundry is still a government agency; bureaucratic, hide-bound, and prone to management fads. And Bob is just a mildly frustrated guy who fixes the computers. Until one day, during a routine training session which suddenly goes horribly wrong, Bob's quick thinking manages to save the lives of several fellow Laundry employees. Now Bob's long-standing application for field work has been reconsidered.

As his first real field assignment, Bob is sent to the US to meet a Professor Dominque ("Mo") O'Brian, whose philosophical studies may have been heading down a dangerous path. When Mo is kidnapped by crazies who want to sacrifice her to open a portal to another dimension, though, Bob's job suddenly gets a lot harder. The next thing Bob knows, he's up to his neck in demons, and a long-delayed Nazi plot to unleash an unspeakable evil on the world.

open/close all folders
Tropes in The Atrocity Archive
Advertisement:
Tropes in "The Concrete Jungle"