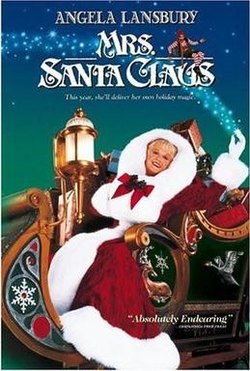 A 1996 Made-for-TV Movie putting Santa's wife in the spotlight.
Advertisement:

It's December 1910, and Mrs. Claus (Angela Lansbury) is having marital woes. Her husband Nicholas (Charles Durning) is so invested in his work, he pays her no attention. She has an idea for a new route he should try during his annual toy delivery, but when she can't convince him to even give her a hearing, she takes the sleigh and the reindeer to go try it out for herself, with only the head elf Arvo knowing where she's gone. When she gets blown off course, she ends up on the Lower East Side of Manhattan and finds herself stranded there for the time being while Cupid the Reindeer recovers from a sprained ankle.

Determined to make the most of it, Mrs. Claus (using the name "Mrs. North") rents a room from a widowed Jewish woman, Mrs. Lowenstein, and gets involved in minor subplots regarding her neighbors. Mrs. Lowenstein left her home country due to civil unrest, and cannot let herself fully unpack in her new home in case she has to escape in a hurry again. Her daughter Sadie is a crusader for women's rights, much to the distress of her mother, who is convinced that she's going to get arrested. Sadie is the object of the affections of a fellow immigrant, Marcello, who is pretty much the only person who will even listen to her street preaching. Another neighbor is young Nora, who works so she can help her father pay for her mother and baby brother to come to America from Ireland. She's the one who helps "Mrs. North" get a job at Tavish Toys, where the owner deliberately makes toys guaranteed to fall apart on the children who play with them. Meanwhile, back in the North Pole, Arvo is starting to panic because not only is Santa growing depressed, but since Mrs. Claus took the sleigh, Christmas itself is endangered.

Tropes Mrs. Claus took with her in the sleigh: