Film / The Story of Robin Hood and His Merrie Men 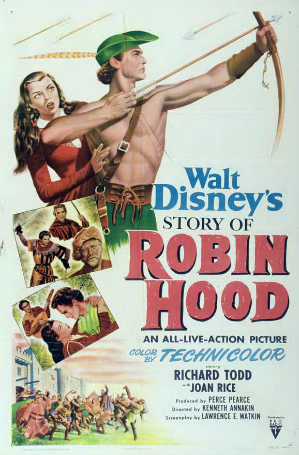 Hark to the tale of Robin Hood
And his Merrie Men
Whose like you are not like to see
In all the world again...
Advertisement:

The Story of Robin Hood and His Merrie Men is a 1952 Disney live-action film starring Richard Todd as Robin Hood.

King Richard the Lion Heart leaves for The Crusades, accompanied by the Earl Of Huntingdon and the old Sheriff of Nottingham, and leaving the country in the hold of Queen Eleanor (who is also taking care of Huntingdon's daughter Marian), the Archbishop of Canterbury, and Prince John. Then Prince John starts to scheming to take over the kingdom with the help of his new Sheriff, starting with an archery contest to gather an army, which results in Robin Fitzooth, Marian's sweetheart, becoming an outlaw and taking the name Robin Hood. Robin and his band of Merry Men try to foil John's plans, but then news arrives of Richard's capture, and things start to deteriorate.

Not to be confused with Disney's 1973 animated Robin Hood film, which is an Anthropomorphic Animal Adaptation.