It's Fake Fur, It's Fine 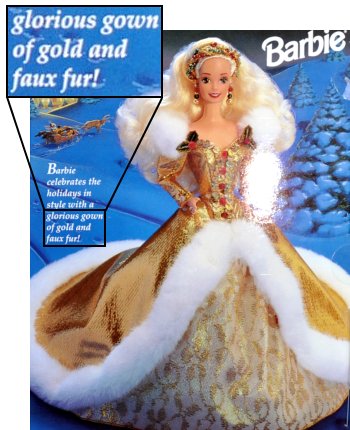 Didn't hurt that the doll's price wasn't as high as if her dress had been trimmed with real fur.
"Do you know how many polyesters died to make this coat!?"
Advertisement:

Basically a work explicitly states that a character is wearing fake fur, to avoid upsetting any anti-fur viewers.

The main reason for this is having the glamour of fur without any of the guilt (or angry letters).

Note that simply wearing fake fur isn't enough, since that could just be for budget reasons. This requires the show clearly stating it In-Universe in some way.

In Real Life, some people claim some vintage furs they have are fake, to avoid harassment. Conversely, it is also possible to buy clothes containing real fur claiming to be faux fur, since farming certain types of animals for fur can actually be cheaper than synthetic materials. There has also been backlash against fake fur because it's a type of plastic, which has led to debates on whether it's truly better for the animals and environment. Maybe the safest choice is to just avoid both variations altogether if possible. That, or Take a Third Option by making fake fur made out of sustainable, eco-friendly, and plastic-free materials like plant fibers.