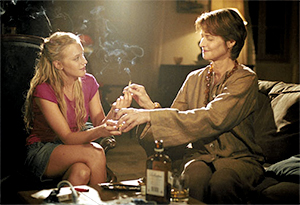 It is about an English writer named Sarah Morton (Rampling) who receives an offer from her publisher to take some time off and spend it at his estate in France. Sarah accepts, and subsequently begins working on a new novel, but shortly afterward, her publisher's adult daughter Julie (Sagnier) arrives and decides to spend some time at the house as well.

It should not be confused with La Piscine, a 1969 French thriller starring Alain Delon.