Characters / A Song of Ice And Fire - Cersei Lannister

Queen Regent Cersei Lannister, Light of the West, Protector of the Realm 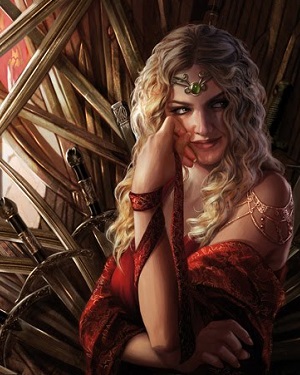 "The only way to keep your people loyal is to make certain they fear you more than they do the enemy."

Wife and Queen of King Robert. Twin sister of Jaime, older than him by perhaps a minute. A very ambitious and cunning woman, she hates the restrictions put on her because of her gender. She is a physically beautiful but morally repulsive Mama Bear/Evil Matriarch combination, and fiercely protective of her children. She staunchly refuses to become a dowager to Joffrey's (and latter Tommen's) wife and queen Margaery Tyrell.