Characters / A Song of Ice and Fire - House Baratheon

This is a listing of members of House Baratheon who appear in A Song of Ice and Fire.

For the House Baratheon of Dragonstone, see here

For the House Baratheon of King's Landing, see here 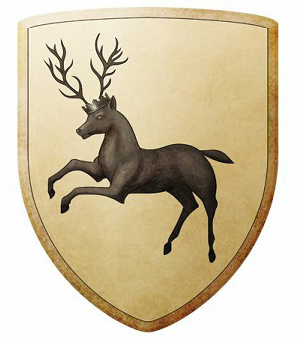 "Ours Is The Fury"
— Baratheon House Wordsnote -From the original House Durrandon words-
Advertisement:

The current royal house. A house with a tradition of being aggressive, they rule the stormy eastern coast. Their brutal treatment at the hands of Aerys the Mad made them the first to rise in rebellion against the Targaryens. The impregnable castle Storm's End is their seat. The Baratheon sigil is a crowned black stag inherited from their Durrandon predecessors. The Baratheons are the youngest of the Great Houses, and the house's founder may have been the bastard half-brother of Aegon Targaryen I. Robert's legal claim to the throne is through his paternal grandmother Rhaelle Targaryen, daughter of Aegon V. Their members have black hair and blue eyes.

House Baratheon characters are yet to be featured as POV characters in A Song of Ice and Fire, though they are prominently featured in the story.

The Baratheons of the Current Age

The three sons of Lord Steffon Baratheon and Cassana Estermont. Raised under wardenship and Maesters after their parents perished on a voyage back from Essos, the current Baratheons, Robert, Stannis and Renly are among the most influential members that have ever come from the noble house. They are noted for not being particularly fond of each other and for being extremely different in their personalities.

Renly Baratheon, the First of His Name 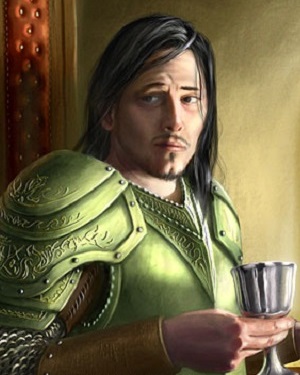 "The Targaryens called Robert usurper. He seemed to be able to bear the shame. So shall I."

King Robert's youngest brother. He is Lord of Storm's End, Lord Paramount of the Stormlands, and Master of Laws at the start of the series. A handsome, flashy and charismatic young man, he is very popular with the common people. Later, Renly refuses to support either his nephew Joffrey's claim to the throne or his brother Stannis's rebellion, and declares himself King since that he has the largest army in Westeros thanks to his alliance with the Tyrells.

Son of Lord Ormund and Rhaelle Targaryen, husband of Cassana Estermont, and father of Robert, Stannis, and Renly Baratheon.

Lord Orys Baratheon, Hand of the King, Lord of Storm's End, Lord Paramount of the Stormlands 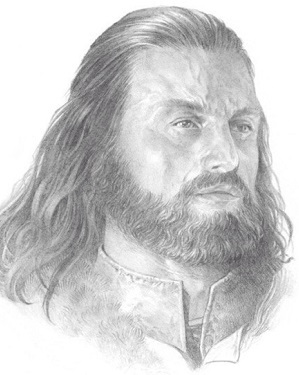 "My shield, my stalwart, my strong right hand."
— King Aegon Targaryen I

Best friend, trusted advisor and rumored bastard brother of Aegon the Conqueror. Became the founder of House Baratheon when he defeated the Storm King Argilac Durrandon, claiming his ancient castle, Storm's End, and the Storm Queen Argella. He and Argella had at least one child together, a son named Davos. He was also the first person to serve the office of Hand of the King.

The son of Orys Baratheon and Argella Durrandon and Lord of Storm's End during the reign of Aenys I Targaryen.
Ser Raymont Baratheon

Ser Raymont Baratheon was a knight from House Baratheon and a younger son of Lord Baratheon. He was a member of Aenys I Targaryen's Kingsguard. Ser Raymont saved the life of his king when Poor Fellows attempted to murder him in his bed after scaling the walls of the Red Keep.

Lord Rogar Baratheon, Protector of the Realm, Hand of the King

Lord of Storm's End and Lord Paramount of the Stormlands during the reign of Maegor Targaryen. He was the first lord to declare for the young Jaehaerys Targaryen and was proclaimed Hand of the King and Protector of the Realm as a result. He later married Alyssa Velaryon, siring Boremund and Jocelyn Baratheon.

"Rather name me a kingslayer than him a kinslayer!"

The younger brother of Lord Rogar Baratheon, who would eventually betray the kingdom and joined the second Vulture King. During the Third Dornish War, while Rogar fought and killed the Vulture King, he faced and was killed by King Jaehaerys I himself.

The Lord of Storm's End and Lord Paramount of the Stormlands who died prior to the Dance of the Dragons. The World of Ice and Fire reveals he was the son of Rogar Baratheon (grandson of Orys Baratheon) and Alyssa Velaryon (King Aenys I's widow), and the older brother to Jocelyn Baratheon (who married Prince Aemon, oldest son of King Jaehaerys I).

The younger sister of Boremund Baratheon, who married Prince Aemon Targaryen, oldest son of King Jaehaerys I and mother of their only child, Rhaenys Targaryen, the Queen who Never Was. 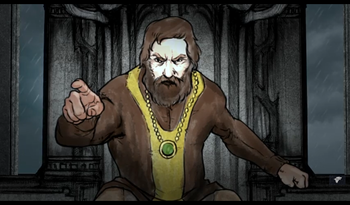 "Lord Borros was the wind, which rages and howls and blows this way and that."
— Septon Eustace

The son of Lord Boremund and Lord of Storm's End during the Dance of the Dragons. He had four daughters and a posthumous son.

The eldest of the Four Storms. Her father betrothed her to the widowed Aegon II Targaryen, and was devastated when the king was found dead because it meant she wasn't going to be queen. For her involvement in the poisoning attempt of King Aegon III and Queen Daenaera, she was forced to marry the elderly landed knight Walter Brownhill.

The second eldest of the Four Storms and considered the prettiest. She was described as a sweet girl, if somewhat frivolous.

The third of the Four Storms. She and her sister Cassandra were presented to King Aegon III as marriage candidates. While she asked if he liked her gown, her sister later put it about that her question was if he liked her breasts.

The youngest of the Four Storms, and considered the cleverest, but also the least comely. When Lucerys Velaryon left Storm's End after being rejected, she apparently taunted Aemond by asking him if his nephew had taken his eye or "one of his balls". Aemond immediately left the room and killed Lucerys on dragonback. By the time of Aegon III's coronation, she had joined the Silent Sisters.

The only son and youngest child of Borros Baratheon and his wife Elenda Caron. He was born seven days after the death of his father Borros at the Kingsroad and became Lord of Storm's End since birth.
Lord Lyonel Baratheon 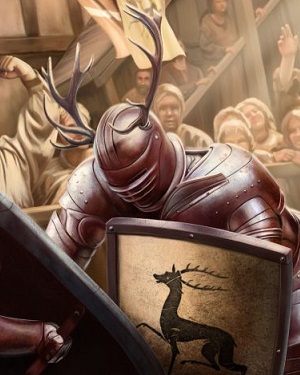 "There has not been a Trial of Seven for more than a hundred years. I was not about to miss a chance to fight the Kingsguard knights, and tweak Prince Maekar's nose in the bargain."

Called the Laughing Storm, Lyonel Baratheon was a knight from House Baratheon who participated in the Ashford Tourney during The Hedge Knight. He was noted for his skill in jousting and his booming laugh. When Ser Duncan was on trial, Lyonel supported him during the Trial of the Faith. He knighted Raymun Fossoway so that he might help Duncan as well.

Later in life he rose in rebellion against King Aegon V, outraged that Prince Duncan had broken his marriage contract to his daughter. The rebellion ended when Ser Duncan the Tall defeated Lyonel in a duel and another marriage pact (between Lyonel's heir, Ormund, and Aegon V's daughter, Rhaelle) was brokered.

Son and heir of Lyonel Baratheon. Lord of Storm's End and Hand to King Jaehaerys II, Lord Ormund commanded the Westerosi army during the War of the Ninepenny Kings. He was married to Rhaelle Targaryen (sister to Jaehaerys II), with whom he had a son, Steffon.