Characters / A Song of Ice and Fire - Historical Kingsguard

This is a listing of members of the Kingsguard who served the founding Targaryen dynasty and who appear in the prequels, companion media and backstory of A Song of Ice and Fire.

"The days when men like Ryam Redwyne and Prince Aemon the Dragonknight wore the white cloak are gone to dust and song."
—Varys

The Kingsguard who served the Targaryen Dynasty and appear in the Prequels and Companion Media are mentioned here. Entries are listed in descending order of regime. Each member is listed with the king who they ended their service under.

The Kingsguard of King Aegon I, the Conqueror

The Bastard of Cornfield

A bastard of House Swyft. He would rise to Lord Commander.

The Kingsguard of King Aenys I

Ser Raymont Baratheon was a knight from House Baratheon. He was a member of Aenys I Targaryen's Kingsguard.

The Kingsguard of King Maegor I

A knight of House Darklyn and member of Aenys I Targaryen's Kingsguard, and later for Maegor I Targaryen. He was killed by Lord Corbray in 43 AC.

A knight of House Moore and member of Maegor I Targaryen's Kingsguard.

One of the two Kingsguard who defected from Maegor the Cruel to join Jaehaerys. Despite his good intentions, Jaehaerys sent him and Raymund Mallery to the Wall for abandoning their oath. At the Wall he and Raymund tried to mutiny, but while Mallery managed to escape for a time, Bracken was executed by Lord Walton Stark.

One of the two Kingsguard who defected from Maegor the Cruel to join Jaehaerys. Despite his good intentions, Jaehaerys sent him and Olyver Bracken to the Wall for abandoning their oaths. He and Bracken tried to mutiny and fled Beyond the Wall, leading to the death of Lord Walton Stark.

A knight of House Langward and one of the members of Maegor's Kingsguard that remained loyal to the Cruel. Instead of exile or execution, he demanded a trial by combat. While King Jaehaerys wanted to face the knight himself, Ser Gyles Morrigen insisted on fighting in his stead. Morrigen proceeded to make short work of him.

The Kingsguard of King Jaehaerys I, the Conciliator

The nephew of Damon Morrigen the Devout, he became the first Lord Commander of the Kingsguard under King Jaehaerys I.

The Red Dog of the Hills 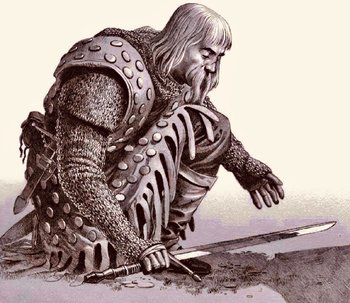 Grand Captain of the Warrior's Sons during the reign of King Maegor Targaryen. Later appointed Lord Commander of the Kingsguard.

A hedge knight who became a member of Jaehaerys I's Kingsguard during the so called War for the White Cloaks, despite his age and disabilities. He died of the Shivers along with his sworn brother Victor the Valiant at the age of 73.

One of the five knights that joined the Kingsguard after the so called War for the White Cloaks. He was formerly a sworn sword of Lord Myles Smallwood and vouched for him to be Hand of the King. He was killed in Andalos by brigands who had been spreading the rumors of a dragon near Pentos.

A former sworn sword of House Royce of Runestone, he was one of the five champions chosen during the so called War for the White Cloaks to fill the vacancies of Jaehaerys Kingsguard. He died of the Shivers in 59 AC.
Ser Pate

The youngest of the five champions chosen during the tournament to fill the vacancies of Jaehaerys' Kingsguard during the so called War for the White Cloaks. When people questioned if he was truly a knight, Ser Joffrey Doggett knighted the lad himself to quiet those doubts.

A knight of House Strong and Kingsguard to Jaehaerys I.

Ser Clement Crabb was a knight of House Crabb. He was a member of the Kingsguard during the reign of Jaehaerys I Targaryen.

The Kingsguard of King Aegon II

The Queensguard of Rhaenyra

See the Court of Rhaenyra I page.

The Kingsguard of Aegon III, the Dragonbane

A knight of the Kingsguard sent by Ser Tyland Lannister to reclaim Harrenhal after rumors of a powerful witch living there became known. The witch turned out to be Alys Rivers, and when he demanded her surrender, he somehow died and his men were routed in the panic.

Nephew of Unwin Peake, and served alongside his bastard half-uncle in the Kingsguard.

The new Lord Commander of the Kingsguard anointed after the coup against the Rogare family and Lord Thaddeus Rowan after the death of Marston Waters.

The Kingsguard of Daeron I, the Young Dragon

A member of House Oakheart. He took part in the Conquest of Dorne and died during it, cut down along his king at the Prince's Pass.

The Kingsguard of King Aegon IV, the Unworthy

"The tale of Prince Aemon's treason with Queen Naerys was only that, a tale, a lie his brother told when he wished to set his trueborn son aside in favour of his bastard."
—Ser Arys Oakheart

The brother of King Aegon IV and Queen Naerys. Considered the finest knight who ever lived, he was Lord Commander of the Kingsguard, serving under four kings. He was one of the few people his sister Naerys was close to (along with his nephew Daeron II). Whispers of his alleged affair with his sister helped spark the Blackfyre Rebellion. He died protecting his brother Aegon IV from would-be assassins sent by House Toyne, seeking revenge for their brother's execution.

The Kingsguard of King Daeron II, the Good

"It's said that whenever Blackfyre and Lady Forlorn clashed, you could hear the sound for a league around. It was half a song and half a scream, they say."
—Ser Eustace Osgrey

A knight of House Corbray and Kingsguard to Daeron II. He fought during the First Blackfyre Rebellion, at the battle of the Redgrass Field in Lord Arryn's van. He dueled with Daemon Blackfyre for nearly an hour before being defeated. The duel was considered a sight to behold, partly because of the clashing of two Valyrian steel swords against each other. Severely injured from the duel, Daemon ordered Redtusk to bring Gwayne to the rear to see to his wounds. He wielded Lady Forlorn, the ancestral Valyrian steel blade of House Corbray.

A knight of the Kingsguard, appointed during the reign of Daeron II in place of Quentyn Ball.
Ser Roland Crakehall

A knight of House Crakehall who served Daeron II.

Twin Kingsguard knights from House Cargyll. Their loyalties were split during the Dance of the Dragons with Erryk siding with Rhaenyra and Arryk siding with Aegon II.
Ser Gyles Greycloak

Gyles Greycloak was a knight of the Kingsguard.
Ser Orivel

Ser Orivel, better known as Orivel the Open-Handed, was a knight of the Kingsguard at an unknown time.