Characters / A Song of Ice and Fire - Court of Rhaenyra I

This is a listing of characters in the court of Queen Rhaenyra Targaryen in A Song of Ice and Fire.

For the rival court of Aegon II, see HERE 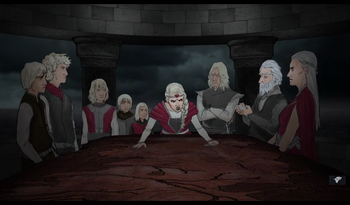 The court and supporters of Queen Rhaenyra Targaryen during the Dance of the Dragons were known as The Blacks. Many were driven by the oath they swore to King Viserys decades before to support her claim to the throne. Not all of her supporters did this out of chivalry, with some Blacks simply swayed by the allure of power and riches, not to mention a few promises from their Queen in waiting. The Blacks were headquartered at Dragonstone and thus mostly made up of Houses sworn to Dragonstone in the Narrow Sea or at Cracklaw Point, but also had heavy support from the North, the Vale, and the Riverlands, along with a handful of houses in the Reach. They were represented by Rhaenyra's personal sigil: the traditional Targaryen sigil (a three-headed red dragon on a black field), quartered with the Arryn sigil for her mother (a white falcon and moon on sky blue), and the Velaryon symbol for her first husband and major supporters (a silver seahorse on sea-green).

Even though she died during the war, her supporters kept fighting to put her sons on the throne - thus all subsequent kings from the Targaryen dynasty thereafter are descendants of the line of Rhaenyra through her sons Aegon III and Viserys II.

Not to be confused with House Blackfyre a rebellious cadet house of the Targaryens who are referred to as the "Black Dragons".

The Half-Year Queen, The Realm's Delight, The Whore of Dragonstone, King Maegor with Teats, Maegor's Teats

... "Traitors have always paid with their lives ... even Rhaenyra Targaryen. She was daughter to one king and mother to two more, yet she died a traitor's death for trying to usurp her brother's crown."
—Stannis Baratheon

Daughter of Viserys I by his first wife Aemma Arryn. Her first husband was her cousin Laenor Velaryon, while her second was her uncle Daemon Targaryen. She had three sons from her first marriage, Jacaerys, Lucerys and Joffrey, and three children from her second marriage, Aegon III, Viserys II and Visenya (who was stillborn). Her claim to the Iron Throne, which was stated in her father's will, was challenged by her younger half-brother Aegon II, sparking the civil war known as the Dance of the Dragons. Rhaenyra lost and was fed to her brother's dragon. She succeeded from beyond the grave, though, when Aegon II died without an heir, and her eldest surviving son became King Aegon III. She is the only recorded woman to have been crowned Queen of the Seven Kingdoms and sat on the Iron Throne in the annals of Westeros up to the present narrative in A Song of Ice and Fire. During the Dance of the Dragons, she wore her father's crown.

Prince Daemon Targaryen, King of the Stepstones and The Narrow Sea

The Rogue Prince, Prince of the City, Lord Flea Bottom

"Over the centuries, House Targaryen has produced both great men and monsters. Prince Daemon was both."
—Archmaester Gyldayn

Second son of Baelon Targaryen and his sister-wife Alyssa. Younger brother to King Viserys I, uncle to Rhaenyra and later, her second husband. His first wife was Rhea Royce, and his second wife Laena Velaryon, with whom he had twin girls Baela and Rhaena. With Rhaenyra, his third wife, he fathered Aegon III and Viserys II, as well as a stillborn daughter, Visenya. Daemon was the wielder of the Valyrian Steel sword Dark Sister and the rider of the dragon Caraxes the Blood Wyrm.

A notable warrior and a mercurial man who wanted above all to be King, Daemon attempted to establish a kingdom in the Stepstones before returning to his brother's court and holding various offices there, including Master of Coin and Master of Laws, though he's mostly remembered for rebuilding and formally restructuring the King's Landing City Watch, giving them for the first time their familiar Gold Cloak uniforms. During the war, he was the person who named Rhaenyra queen of the Seven Kingdoms, attaining for himself the role of Protector of the Realm, holding the title until his death at the end of the war.

Daemon Targaryen's dragon. Large and powerful with red scales. A veteran of Daemon's years of campaigning in the Stepstones, Caraxes was one of the most battle-hardened dragons when the Dance started.

The twin daughters of Prince Daemon Targaryen and Laena Velaryon.

“Monster, monster, get out, get out, GET OUT!”
—Rhaenyra Targaryen

Rhaenyra's third child with Daemon Targaryen. Rhaenyra's rage-induced stress due to her brother usurping her throne led the baby Visenya to be deformed and stillborn.

Master of Ships and Hand of Queen Rhaenyra at the Black Court. Husband of Princess Rhaenys Targaryen and father of Ser Laenor and Laena Velaryon.

The Queen Who Never Was

The Queen Who Never Was lived fearlessly, and died amidst blood and fire.
—Archmaester Gyldayn:

Daughter of Prince Aemon Targaryen and Lady Jocelyn Baratheon. Married to Lord Corlys Velaryon and mother of Laena and Laenor.

Not to be confused with Queen Rhaenys Targaryen, sister/wife of King Aegon I.

The Velaryon Princes of Dragonstone

The three older sons of Rhaenyra Targaryen and Ser Laenor Velaryon, Jacaerys, Lucerys and Joffrey looked nothing like their mother and father -as they turned out brunette and pug-faced-, fueling the rumors that the boys were her sons with Harwyn Strong, notwithstanding that Rhaenyra had Arryn ancestry and Laenor had Baratheon ancestry. In spite of the court's protests, the King allowed them to be part of the line of succession after Rhaenyra, his immediate heir. Dragonriders by their own right, the boys participated in the Dance of the Dragons, and as their mother was crowned Queen by their uncle Daemon, they became the Princes of Dragonstone.

The boys were the first and only heirs to the Iron Throne that did not have the Targaryen last name, as they were Targaryens from their mother's side. After their father's death, Rhaenyra married her uncle Daemon and produced their half-brothers Aegon and Viserys, who wound up becoming kings.

"Our uncle calls us Strongs, and claims we are bastards, but when the lords see us on dragonback they will know that for a lie. Only Targaryens ride dragons."

First son of Princess Rhaenyra Targaryen and her first husband, Laenor Velaryon. During the Dance of the Dragons, Jacaerys became Rhaenyra's designated heir as Prince of Dragonstone. Jacaerys died during the Battle of the Gullet after his dragon Vermax fell to the sea.

"And with his death, the war of ravens and envoys and marriage pacts came to an end, and the war of fire and blood began in earnest."
—Archmaester Gyldayn

Second son of Princess Rhaenyra Targaryen and her first husband, Laenor Velaryon. He was a promising warrior who had great skill in arms. He was formally the Second Prince of Dragonstone during the war, but his death moved his brother Joff up in the line of succession. He was assassinated by his uncle Aemond during a diplomatic mission to Storm's End.

"I want to fight for you, Mother, as my brothers did. Let me prove that I am as brave as they were."

Third and youngest son of Princess Rhaenyra Targaryen and her first husband, Laenor Velaryon. He was at first, the Third Prince of Dragonstone, but the death of Lucerys made him Second Prince, and the subsequent death of Jacaerys made him Rhaenyra's sole heir. He was the only Velaryon Prince who didn't actively participate in the war due to his mother's mandate. While heading to the Dragonpit, he fell to his death after the dragon Syrax shook him off mid-flight.

The first commander of Rhaenyra's Queensguard. He was a member of Viserys I's Kingsguard and was stationed in King's Landing at the time of the king's death. He later sneaked out of the city with several other Rhaenyra loyalists and fled to Dragonstone, where he presented her with Viserys's crown for her coronation.

The second commander of Rhaenyra's Queensguard. He was one of two members of Viserys I's Kingsguard on Dragonstone when news of his death reached the island.

The third commander of Rhaenyra's Queensguard.

A knight of Rhaenyra's Queensguard. Described as a young knight.

A knight of House Redfort.

A member of Rhaenyra's Queensguard.

"Daemon gave us these cloaks and they're gold no matter how you turn them."

A tall and fierce knight who commanded the City Watch of King's Landing.

A knight of the Dragonstone garrison, he betrayed Rhaenyra and defected to Aegon, helping him gather supporters to take Dragonstone from within and ambush Rhaenyra when she returned.

A captain of King's Landing City Watch who commanded the Dragon Gate. He surrendered the Red Keep to Perkin the Flea, only for him to be dragged before the Flea and beheaded by the gutter knight along with Rhaenyra's remaining loyal men.
Ser Pate of Longleaf

A squire in service of the Blacks, he killed Lord Jason Lannister at the Battle of the Red Fork, winning his knighthood and the title The Lionslayer. He died at the First Battle of Tumbleton when he was unhorsed and trampled.

Ser Harmon of the Reeds

Ser Harmon of the Reeds

One of the Seven who Rode, a group of knights sent by Rhaenyra to rescue Prince Joffrey during the Storming of the Dragonpit, being one of the four who survived. He was executed by Perkin the Flea when Garth the Harelip opened the gates of the Red Keep along with 20 other knights loyal to the Queen.
Mysaria

A Lysene dancer and whore that became Prince Daemon's paramour during his time as Commander of the City Watch. Remained her supporter during the Dance of the Dragons. She arranged for "Blood" and "Cheese" to infiltrate the Red Keep and murder one of Aegon II's sons. 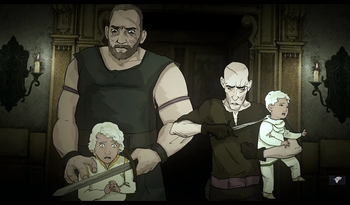 Cheese: Which one you want t' lose, Your Grace?
Blood: It has to be a boy.

Assassins in Prince Daemon's employ. Blood was a former Gold Cloak. Cheese was a rat catcher in the Red Keep.