Characters / A Song of Ice and Fire - Court of Aegon II

This is a listing of characters in the court of King Aegon II Targaryen in A Song of Ice and Fire.

For the rival court of Rhaenyra I, see HERE 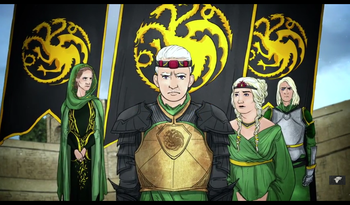 Aegon II's supporters, known as The Greens, were the allies of Dowager Queen Alicent Hightower and driven more by the Queen's power, not to mention the wealth of House Hightower, as well as the ancient Andal tradition that a male comes before a female in the succession. They were headquartered in the Red Keep at King’s Landing or alternatively in the equally prosperous Hightower-held city of Oldtown. These assets gave the Greens an air of legitimacy that the Blacks did not. Support for the Greens came mainly from the Reach, Westerlands, and Stormlands, although several river lords supported them as well. The Greens used a sigil depicting a golden dragon on a black field to represent the famed golden dragon Sunfyre, which they possessed during the Dance of Dragons.

Aegon the Elder, Aegon The Usurper

"The time for hiding is done. Let the ravens fly that the realm may know the pretender is dead, and their true king is coming home to reclaim his father’s throne."

Oldest child of Viserys I and Alicent Hightower. Was married to his sister Helaena and had three children by her (twins Jaehaerys and Jaehaera and Maelor). Crowned by Ser Criston Cole at behest of his mother, Queen Alicent Hightower, sparking the civil war known as the Dance of the Dragons. His personal sigil was the Targaryen dragon, gold, on a field of black. He wore the crown of Aegon the Conqueror and carried Blackfyre, the Conqueror's blade. He was lazy, sulky, and gluttonous. He died in 131 AC after a very brief reign, poisoned by his own supporters.

Second child and only daughter of Viserys I and Alicent Hightower. Aegon II's wife and mother of his three children (twins Jaehaerys and Jaehaera, and Maelor). She committed suicide in 130 AC after spending months in a deep depression following her son's murder.

Second and last spouse of King Viserys I and mother of Aegon II, Queen Helaena and princes Aemond and Daeron Targaryen. Daughter of the long-time Hand of the King Ser Otto Hightower.

The eldest child of Aegon II and Helaena, and twin to Jaehaera. Only 6-years-old during the Dance of the Dragons. He was murdered by "Blood" in 129 AC in retaliation for the death of his cousin Lucerys.

The second child and only daughter of Aegon II and Helaena, and twin sister to Jaehaerys. Six years old during the Dance of the Dragons. She married her cousin Aegon III after her father's death in 131 AC but (possibly) committed suicide only two years later.

Third child and younger son of Aegon II and Helaena. Only 2-years-old during the Dance of the Dragons. He was torn apart by a mob when on the way to Oldtown under the care of Ser Rickard Thorne.

"I lost an eye and gained a dragon that day, and counted it a fair exchange."

Third child and second son of Viserys I and Alicent Hightower. Killed by his uncle Daemon in the Dance over Harrenhal in 130 AC. A caustic, envious man, but a renowned warrior nevertheless, Aemond was the only Targaryen ever to have taken the position of Prince Regent and Protector of the Realm when Aegon II was incapacitated and unable to reign.

"My Lord is kind to say so, but the victory belongs to Tessarion."

Youngest child of Viserys I and Alicent Hightower. He died in 130 AC, during the Second Battle of Tumbleton.

For King Daeron I Targaryen (his nephew once removed), see here

The Kingsguard of Aegon II Targaryen

For other Kingsguard before the events of ASOIAF, see here 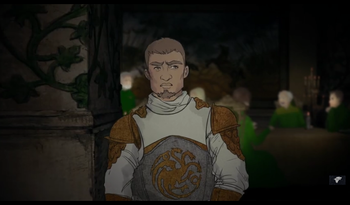 "It is not for you to plead for support from your lords, like a beggar pleading for alms. You are the lawful king of Westeros, and those who deny it are traitors. It is past time they learned the price of treason."

Leader of the Kingsguard during the reign of Viserys I. It was said he was having an affair with Princess Rhaenyra, but it ended badly so he withdrew his support from her and declared loyalty to her half-brother Aegon II, earning his nickname "The Kingmaker". This set off the war known as the Dance of the Dragons.

A knight of House Thorne and member of Viserys I and Aegon II's Kingsguard.

A knight of House Fell and member of Viserys I and Aegon II's Kingsguard. During the reign of Aegon III Targaryen, he was ascended to Lord Commander until his untimely death from the Winter Fever.

A knight of House Belgrave who joined Aegon II's Kingsguard during the Dance of the Dragons.

Hand of the King to Jaehaerys I, Viserys I and Aegon II, and father to Alicent Hightower.

A bastard of the Riverlands and Prince Aemond's bedmate.

A knight from the Blackwater Rush who, alongside Lord Owain Bourney, betrayed the blacks during the First Battle of Tumbleton.

Father and son, they were two men in service to King Aegon II.