Characters / A Song of Ice and Fire - Hedge Knights

"Other knights serve the lords who keep them, of from whom they hold their lands, but we serve where we will, for men whose causes we believe in."
—Ser Arlan

A hedge knight is a wandering knight without a master, many are quite poor. Hedge knights travel the length and breadth of Westeros looking for gainful employment.

Hedge Knights present in A Song of Ice and Fire

Ser Hugh of the Vale

Former squire of Jon Arryn, Ser Hugh was knighted after the death of his lord. He remained in King's Landing to win fame and fortune in tourneys instead of returning to the Vale.

"I have the honour to be Ser Creighton, of whom the singers sing … you will have heard of my deeds on the Blackwater, mayhaps."

A hedge knight who travels with Ser Illifer the Penniless. He encounters Brienne of Tarth during her search for Sansa Stark. His coat of arms is a green field with a brown chief.

A hedge knight who travels with Ser Creighton Longbough. His coat-of-arms is a gold and ermine gyronny pattern.

Advertisement:
The Knight of the Laughing Tree

The Knight of the Laughing Tree was a mystery knight who fought at the Tourney at Harrenhal. He defended the honor of Howland Reed by challenging and defeating three knights whose squires had bullied him, demanding that they chastise the squires in order to ransom back their horses and armor.

The Knight of the Laughing Tree is so-called because of the blazon on his shield, a smiling heart tree. His true identity remains unknown.

Hedge Knights present in Tales of Dunk and Egg

Ser Duncan the Tall, Lord Commander of the Kingsguard 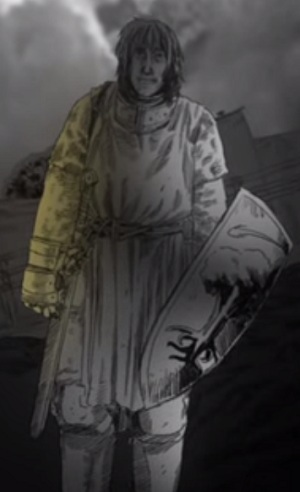 "Dunk the lunk. Thick as a castle wall"

A seven-foot-tall hedge knight who lived many years before the events of A Game of Thrones, eventually becoming Lord Commander of the Kingsguard. Ser Duncan is the POV character of the Tales of Dunk and Egg.

"Another day done, and who knows what the morrow will bring us, eh, Dunk?"

Ser Arlan of Pennytree was a hedge knight born in the village of Pennytree in the riverlands. He was the master of Dunk, the later Ser Duncan the Tall

Arlan's coat-of-arms was a winged chalice, silver on brown.

Ser Bennis of the Brown Shield

A hedge knight in service to House Osgrey.

The Knight of Pussywillows

Supposed bastard son of Ser Quentyn Ball and a camp follower. He became a knight to follow in his father's footsteps. He meets Ser Duncan the Tall and Egg at the Whitewalls Tourney in 212 AC.

Ser Uthor Underleaf, sometimes called the Snail for his personal emblem, was a tourney knight during the reign of Aerys I Targaryen.

A knight who lived during the reign of Jaehaerys I Targaryen. He was one of the many participants of the so-called War for the White Cloaks, a massive tournament to fill in the vacancies at the Kingsguard. While he failed to obtain a spot, he became very popular among the smallfolk.

The Bard of Flea Button

A knight and bard who lived during the reign of Jaehaerys I Targaryen. He participated in the War for the White Cloaks, the massive tournament to fill the vacancies of the Kingsguard. While he failed to win a white cloak, he became popular among the smallfolk for taunting his opponents with ribald songs. When Jaehaerys came of age, he had the City Watch of King's Landing comb Flea Bottom to find the Strummer, so the king could make him the court singer.

Ser Qarl Correy was a household knight in service to House Velaryon at High Tide.

A hedge knight living in King's Landing during the Dance of the Dragons. During the riots against Rhaenyra's rule, he crowned his squire Trystane Truefyre. He occupied the Red Keep after Rhaenyra fled King's Landing. He joined the court of Aegon II when he returned to the capital, but later helped the conspiracy to poison the King.

The squire of Ser Perkin the Flea, he was briefly installed as king in the Red Keep in chaos following Rhaenyra fleeing King's Landing. Ser Perkin claimed Trystane was the natural son of King Viserys I.

Ser Gareth Long was a household knight in service to House Peake, serving as Starpike's master at arms, having a reputation of being a harsh but effective taskmaster. During Lord Unwin Peake's tenure as Hand of the King, he was appointed as the Red Keep's master at arms, where he quickly earned the young Aegon III's hatred for his brutal training methods. Gareth remained in King's Landing even after Peake was dismissed as Hand, until he was caught being involved in a conspiracy to depose Aegon, after which he joined the Night's Watch to avoid execution.