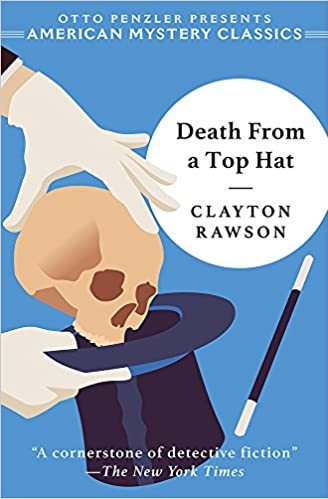 The Great Merlini was the lead character of four Golden Age mystery novels and twelve short stories. He was a stage magician who had retired to run a magic supply shop in New York City. Merlini's adventures were written by Clayton Rawson, himself a trained magician. (One of Merlini's signature tricks, vanishing a lit cigarette, was done the same way Rawson did it.)

The short stories were published in Ellery Queen's Mystery Magazine between 1946 and 1971 (the last one published after Rawson's death). They were later collected in The Great Merlini: The Complete Stories of the Magician Detective.

Two of the Merlini novels were turned into movies, but with heavy editing. Miracles For Sale is based on Death From A Top Hat, though with the lead character's name changed. The Man Who Wouldn't Die took No Coffin For The Corpse and spliced in a more popular fictional detective of the time (Michael Shayne).

Rawson wrote a pilot episode for a Merlini TV show in 1951, but it wasn't picked up by the networks.