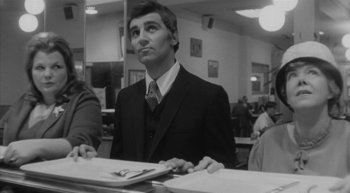 The Honeymoon Killers is a 1970 film written and directed by Leonard Kastle.

, the notorious "Lonely Hearts" killers. Beck (Shirley Stoler) is an overweight, unattractive nurse living with her mother in Mobile, Alabama. Martha's friend Bunny (played by Doris Roberts 27 years before Everybody Loves Raymond) signs her up for a "lonely hearts club", and soon she is exchanging passionate letters with Ray Fernandez, a handsome Spaniard (Tony Lo Bianco).

Ray hits Martha up for a loan, and unsurprisingly soon afterwards writes her a Dear Jane letter. Not content to simply be dumped, Martha makes contact with Ray. She discovers that Ray is a con artist who specializes in contacting lonely women via lonely hearts clubs, romancing them, and then absconding with her money. Martha, who is desperately lonely and has just lost her nursing job, joins Ray in his schemes, posing as his sister. Soon, the two graduate to murder.

The Honeymoon Killers was made by American International Pictures, though they disowned the picture after seeing the final cut and recoiling at the bleak, nhillistic tone of the film. They sold the film to Cinerama Releasing Corporation, who released it to mixed reviews. The film would have been forgotten if not for the Criterion Collection, who released the film in 2003 on DVD.

The film is notable for being a textbook example of neo-noir, with it's bleak low budget production giving it a realistic edge to it. Furthermore, it's notable in that a young go-getter named Martin Scorsese was originally hired to direct but was fired from the project over creative differences (urban legend being that Scorsese wanted a more artsy look for the film), leading Kastle to direct his own script, for his only film credit.