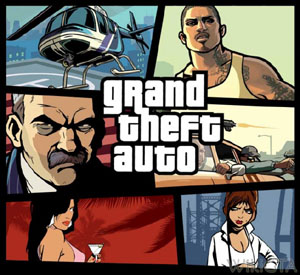 To get by in the criminal underworld you'll always be dealing with these kinds of people.
"Take it to the edge, there's nowhere to hide
And call up the boys, let's go for a joyride!"
— Lyrics from the first game's Signature Song, "Grand Theft Auto" (also known as "Joyride") by Craig Conner
Advertisement:

In 1997, when controversy was still running high over the "immoral" content of games such as Doom, Mortal Kombat, and Carmageddon, Scottish games studio DMA (of Lemmings fame) came out with a game to top them all. Called Grand Theft Auto, it allowed the player to take the role of a ruthless criminal working his way up the ladder of organised crime. The game offered an overhead view of a city, through which your character could walk or drive; the basic objective was to gain enough points — or rather, in the context of the game, earn enough money — to progress to the next level. The lowest-paying activity was damaging cars by fender-benders or by shooting them; more money was earned by stealing cars, destroying cars, and running down pedestrians; more still by selling the stolen cars down at the docks and by killing police officers.

The main source of income, though, was by accepting missions from a faceless, voiceless criminal boss, by either answering certain phones or getting into certain cars. It wasn't necessary to complete or even accept these missions (which could be done in whatever order the player wished), but doing so was worth a lot of money, and raised the amount of money the lesser activities were worth. The missions included such noble exploits as robberies, assassinations, drug-running, kidnappings, and blowing up buildings. All the while, the player had to keep from losing all his lives, as well as keeping out of the clutches of the police.

Ironically, the first game wasn't all that gruesome - simple blotches of red on the pavement marked your kills, and the detail regarding damage to your current car was not high. Still, the game was a massive success, almost entirely on the basis of the controversy it generated. This was deliberately contrived by the game's publishers: they hired the notorious tabloid publicist Max Clifford to create a furor in the media, which resulted in a huge demand for the game.

In 1999, two expansions were released: Grand Theft Auto: London, 1969 and Grand Theft Auto: London, 1961. Both were essentially the original game with somewhat different art design, a new setting (London in opposite ends of The '60s), and a batch of new missions. Also that year came Grand Theft Auto 2, which was almost the same as the original but set 20 Minutes into the Future, with the chance to save your game (at a steep cost), much improved graphics, and a finicky "Respect" system whereby you could strengthen your standing with one of three gangs by carrying out acts against the other two.

Grand Theft Auto III was an entirely different ball game. It's probably not a coincidence that DMA were now working on a new console and attached to a new publisher: the wealthy Rockstar Games division of Take Two Interactive. First and foremost, the overhead view was done away with, bringing the game into three dimensions instead and allowing for a LOT more gore. An overhead camera could be selected for those who liked the old way, but only in that particular game. Vice City and onwards did away with the option fully.

Also, an actual story was implemented, about a thug who escapes from a prison van, and plots revenge against his traitorous partner in crime/ex-girlfriend while establishing himself in the underworld of Liberty City. Voice actors were brought in for the first timenote but ironically, not for the main character — including respected Hollywood character actors like Robert Loggia, Kyle MacLachlan, Michael Madsen, Debi Mazar, Joe Pantoliano, and Michael Rapaport. The number, variety, and complexity of the missions were raised. The radio stations started using licensed material (though most of the soundtrack was still made in-house) and send-ups of radio commercials and DJ chatter.

The game's success paved the way for a series of games which blurred the line between expansion pack and sequel. DMA, now wholly incorporated into Rockstar as "Rockstar North", came up with two more titles. Grand Theft Auto: Vice City moved the action to a cheery mockery of '80s Miami, introduced motorcycles, was the first entry where the lead character spoke (with the voice of Ray Liotta, no less), and the first to have a soundtrack fully composed of licensed music. After that came Grand Theft Auto: San Andreas, set in early '90s California with a flavor that was less Goodfellas and more Boyz n the Hood. It allowed the player jet aircraft and more than enough airspace to get the use out of them, as well as three cities (expies of Los Angeles, San Francisco, and Las Vegas) with vast, open countryside in between. It also cast Samuel L. Muthafukkin Jackson as the Big Bad. Meanwhile, Rockstar's other studios crafted Grand Theft Auto: Liberty City Stories (a prequel to GTA3) and Vice City Stories (a prequel to Vice City) for the PlayStation Portable, and Grand Theft Auto Advance (another GTA3 prequel in the original overhead style) for the Game Boy Advance.

The series' seventh-gen debut, Grand Theft Auto IV, reset the series' canon and went in a Darker and Edgier direction, and saw a return to Liberty City, now fully redesigned to look more like its inspiration. It was the first GTA since 2 to have online multiplayer, and it also had two DLC mission packs, The Lost and Damned and The Ballad of Gay Tony, made for it. Grand Theft Auto: Chinatown Wars, set in the same canon, returned to overhead action for the Nintendo DS, the PSP, and Apple's iDevices.

Grand Theft Auto V was released on 17 September 2013, amassing over a billion dollars in sales over three days, over 6 billion dollars by 2019, and became the fastest selling entertainment blockbuster in history. Taking criticism of GTA IV's downer tone to heart, Grand Theft Auto V follows the story of three new villain protagonists fighting to better themselves in a cynical, morally bankrupt world in and around the city of Los Santos. In addition to many new activities and gameplay refinements, such as the ability to switch to other player characters instantly, the new Grand Theft Auto Online boasts an ever-expanding compliment of up to a thousand missions and other diversions.

After eight years of silence, with Rockstar focusing almost exclusively on GTA Online; October 8, 2021 marks the day that Rockstar finally gave the greenlight to Grand Theft Auto: The Trilogy - The Definitive Edition, a remastered compilation of the first three games of the 3D era, complete with graphical enhancements via Unreal Engine 4 and gameplay improvements similar to those found in Grand Theft Auto V. It was released on November 11, 2021 for the PC, PS4, Xbox One, and Switch, with a mobile version expected in 2022. To say that reactions to this "Definitive Edition" before and after release has been polarizing would be a massive understatement...

After fourth months of the release of the controversial remaster, Rockstar announced the development of the next Grand Theft Auto game is "well underway".

Compare to Driver, Mafia: The City of Lost Heaven, Saints Row, and The Simpsons Hit & Run. Also, there's Red Dead Redemption and L.A. Noire, both considered to be Spiritual Successors to the Grand Theft Auto franchise.

A Docudrama based on the franchise entitled The Gamechangers was produced by BBC in 2015, starring Daniel Radcliffe as Sam Houser.

Not to be confused with the Ron Howard movie of the same name.

Now has a character sheet. You can vote for your favorite game here

Works within this series (details on games with their own pages) listed by Alternate Continuity:

Note: If a trope only applies to a single game in the series, and that game has its own page (see above), then place it on that page. If the trope applies to the many radio stations, TV stations, internet websites, et cetera in the GTA universe, put it under GTA Radio.