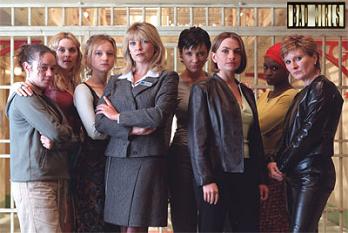 There are bad girls, and then there are the girls of Larkhall women's prison. This highly acclaimed, original and controversial drama explores the never-ending drama that occurs between the prisoners and the men and women who are paid to lock them up. Never shying from the darker side of prison life, Bad Girls celebrates the warmth, compassion and defiant sense of humour that can sometimes triumph even behind bars...

Bad Girls was a British Prison drama that ran from 1999 to 2006. Set in the fictional prison HMP Larkhall, it focused not only on the lives of the female prisoners, but also on the prison staff. The storyline concentrated on G-Wing, as opposed to the entire prison, but D-Wing has been mentioned on several occasions and a few episodes showed scenes from a men's prison.

The series was critically acclaimed and controversial at times, but ITV axed the series in 2006.

For those who have never heard of the show, it is similar in concept to Oz from the states, with both shows sharing a no-holds-bared approach to homosexuality and violence, although it would be unfair to say that Bad Girls is just a British version as it maintains its own style and originality, but parallels can certainly be drawn.

This game series provides examples of :