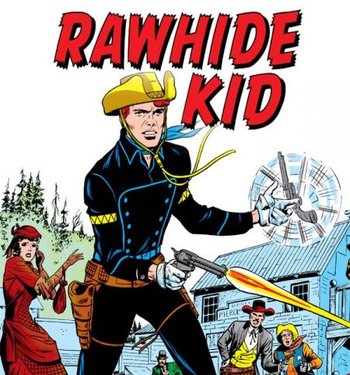 The Rawhide Kid (real name: Johnny Bart, originally given as Johnny Clay) is a fictional Wild West cowboy appearing in American comic books published by Marvel Comics. A heroic gunfighter of the 19th-century American West who was unjustly wanted as an outlaw, he is one of Marvel's most prolific Western characters. He and other Marvel western heroes have on rare occasions guest-starred through time travel in such contemporary titles as The Avengers and West Coast Avengers.

When Johnny Bart was an infant, his parents, the Clays, were killed in a raid by Cheyenne Indians. The infant Johnny was overlooked by the Cheyenne raiders, however, and was soon found by Ben Bart, a Texas Ranger. Bart adopted Johnny and raised him on his ranch outside Rawhide, Texas. Bart named his adopted son "Johnny Bart." Ben Bart was one of the fastest gunmen in the Texas Rangers. When Johnny was sixteen, Ben, who by then had retired from the Texas Rangers, began teaching him how to use a gun. By the time that Johnny had reached his eighteenth birthday, Ben had taught him all he could, and Johnny had become even faster and better than Ben was at using a gun.

Shortly after his eighteenth birthday, Johnny Bart went into Rawhide to buy the month's provisions for the ranch. Once he was gone, a drifter named Hawk Brown confronted Ben Bart and challenged him to draw his gun; Brown hoped to make a reputation for himself by outdrawing the renowned Ben Bart. Unknown to Ben, Brown had an accomplice named Spade hiding nearby Just as Ben drew his sixguns, Spade called out to Bart from behind, distracting Ben just as Brown and Spade had planned. Brown took the opportunity to gun Ben Bart down.

On his return, Johnny Bart found his adoptive father's corpse and buried him. Johnny vowed to avenge Ben Barr's death. He could tell that two men were responsible for Ben's death from the way the bullets struck him as if he had half turned around to see someone behind him. Johnny rode to Rawhide, where Brown and Spade were claiming that Ben Bart had started a fight with Brown and that Brown had outdrawn him fairly Johnny confronted Brown, who drew his guns on him. But before Brown could squeeze his triggers, Johnny drew his own guns and fired them, wounding Brown in the arm. Seeing Spade in the mirror about to shoot him from behind, Johnny, without turning around, fired over his own shoulders, hitting Spade in his gun arm. Johnny Bart left Brown and Spade to be taken into custody. Johnny declared he would not return home to the ranch, but would use his gun-fighting prowess to fight evildoers like Brown and Spade wherever he could, no matter what the odds were against him. Johnny called himself the Rawhide Kid after the town in which his gun-fighting career began.

Despite being declared an outlaw, the Rawhide Kid continued to defend the weak and helpless and to battle criminals. Among the most notorious or unusual of his many adversaries were the Cougar, the original Red Raven, the Ape, the Tyrant of Tombstone Valley, the Masked Maverick, Marko the Manhunter, and the strange alien called the Living Totem.

The Rawhide Kid sometimes joined forces with other legendary gunfighters, including Kid Colt, the second Phantom Rider, and the Two-Gun Kid. The Rawhide Kid even allied himself with members of the Avengers who visited his time period.

The Rawhide Kid was still an active gunfighter as late as 1897. It has not yet been revealed how, when, or where he died.

Tropes associated with the Rawhide Kid and his comics: