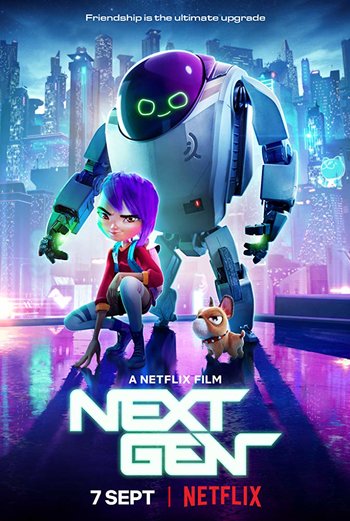 "The most important parts of me are the memories of you. It hurts when I lose them."
— 7723
Advertisement:

Next Gen is a 2018 CG animated movie directed by Kevin R. Adams and Joe Ksander. It stars the talents of John Krasinski, Charlyne Yi, Jason Sudeikis, Michael Peña and Constance Wu. The movie was released as a Netflix original on September 7, 2018 and was an international co-production between the United States and China.

In a futuristic metropolis called Grainland where humans and robots live in harmony, rebellious teenager Mai (who's neglected by her single mother) meets a top-secret learning android named 7723 (developed by scientist Dr. Tanner Rice), with whom she forms a friendship, in a laboratory at IQ Robotics during a product launch, and after discovering something wrong with the products presented, they must band together to stop an evil mastermind while learning to never underestimate the bittersweet power of memories.

Next Gen provides examples of: