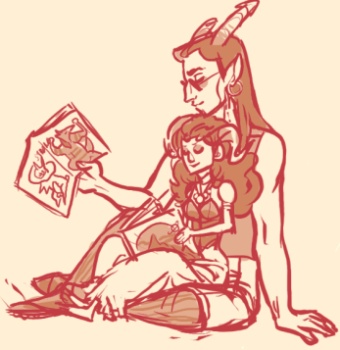 A Homestuck fanfiction by Roachpatrol

Alternia: where warm blood defines a troll's nobility, cold blood their commonality, and Her Imperial Luminescence Aradia Megido struggles to keep her people together. Whether or not she can do it before Ascension Day is another thing entirely.

In other words, where some fanfictions switch around the blood colors of the trolls, Hemostuck does a complete spectrum reversal with Aradia her Imperial Luminescence at the top and saltlickers Eridan and Feferi at the bottom. It's a gorgeously illustrated story that's as much about the characters as it is about the world they live in, with new gods

and blue blood death matches and so much more. At the moment, it's split into three parts: Pretty Little Windstorm, which focuses on Tavros being a resignedly badass dork and his uncouth lowblood friend who drags him on unseemly adventures; Fisher Prince, which tells the story of Eridan Fucking Ampora, the swaggest seadweller to stalk the docks; and Lost Teeth Like White Jewels, a tale of how Karkat, a stubbornly atheist member of the Threshecutioner Corps gets involved in both hunting seamonsters and ridiculously tangled quadrant drama.

The stories themselves can be read here

. Background information and tidbits of what lies ahead (there is quite a lot of thought being put into this great honking AU) can be found on this blog