Film / Message in a Bottle 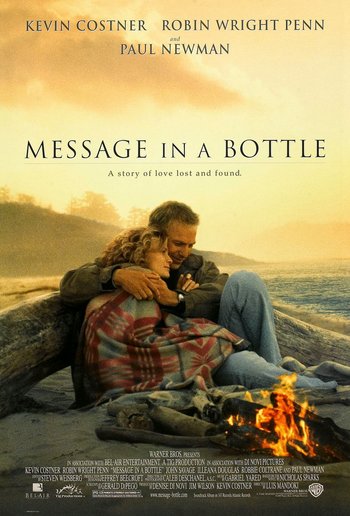 The story is a romantic drama about Theresa (Wright), a single mother who tries to move on after her divorce, and Garret (Costner), a man who cannot imagine entering a relationship after his wife Catherine died. Catherine's death has an impact on the lives of many people, inflaming the conflict between Garret, who is a shipwright, and her family, who had wanted her to become a famous painter and now blames the man for her untimely death. Unable to come to terms with himself, Garret writes a letter to Catherine, puts it into a bottle and throws out at sea. After Theresa accidentally finds the bottle, she begins a private investigation to find the author of the letter, feeling curious about the story behind it.

It is notably the first film adaptation from author Nicholas Sparks, and began the trend of high profile Hollywood adaptations of his works that would last through the 2000s and 2010s.