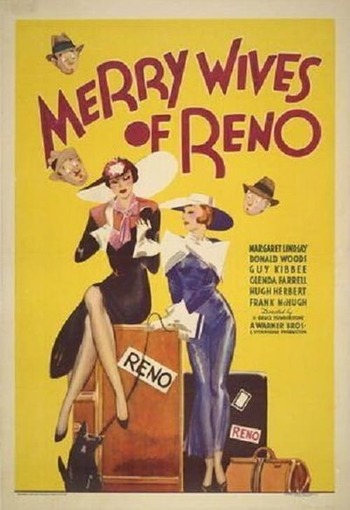 Merry Wives of Reno is a 1934 film directed by H. Bruce Humberstone.

The plot revolves around the now-Forgotten Trope of divorce in Reno, NV, a place that offered no-fault divorce when very few places in America did. Madge (Margaret Lindsay) and Lois are both wives in New York. Madge and her husband Frank have been married a year and are deeply in love. Lois and her husband Tom have been married 19 years and loathe each other. Through various plot machinations both become convinced that one Bunny Finch (Glenda Farrell) had sex with their husbands. Only Lois is right, but both head out to Reno anyway.

Frank, whose clumsy lies when the truth would have worked fine have him on the verge of divorce, heads out to Reno in a panic, Tom tagging along. Bunny is also going along, not because she's getting a divorce, but because her gullible husband Col. Fitch, who is entirely too fond of sheep, has bought a Nevada sheep farm.

All of the above is basically an excuse for double entendres and sex jokes.