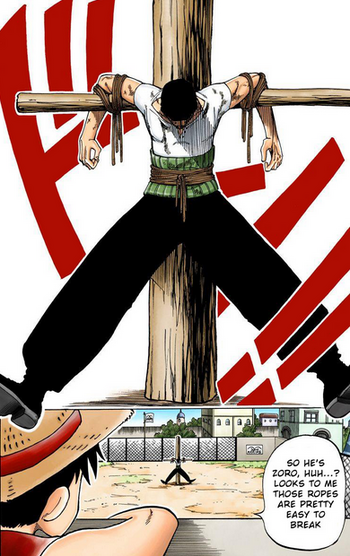 A new character is met when the protagonists rescue them from a tricky situation, or when they rescue the protagonists. Often creates a strong emotional bond to a new character, as said rescue adds instant dramatic tension to any first impression. Depending on attitude and reaction of character, can act as an Establishing Character Moment. Will sometimes result in a Rescue Romance or Recruitment by Rescue. Compare to Come with Me If You Want to Live, which has a similar introduction dynamic. The rescuer can act as The Cavalry, or Big Damn Heroes depending on the situation.

While this meeting may often overlap with introducing the character to the audience as well, it does not necessarily have to — this is an in-universe trope about how the protagonist(s) meet the character.

Ashima, the Indian tank engine, is introduced rescuing Thomas from falling into the water after she almost knocks him in.

Ashima, the Indian tank engine, is introduced rescuing Thomas from falling into the water after she almost knocks him in.