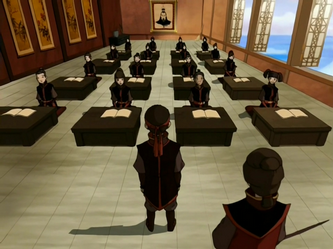 Aang looks upon his Fire Nation classmates.
"Listen, guys, those kids at school are the future of the Fire Nation. If we wanna change this place for the better, we need to show them a little taste of freedom."
Advertisement:

When the Gaang steals Fire Nation clothes to fit in, Aang accidentally enrolls in a school when his clothing turns out to be a school uniform. Claiming he's picking up useful intelligence but really just wanting to be normal, he convinces the rest of the Gaang to let him continue the charade. However, Aang has picked the wrong place to do it: the Fire Nation is high on discipline, low on individuality. Aang attempts to fix this by throwing a secret dance party for his new classmates.

Example of:
Go to Your Room!