As with many character pages, merely knowing that a trope applies to a character can be a major spoiler. Hiding said spoilers is against the Spoiler Policy, so they will be unmarked.

open/close all folders
Advertisement:
The Party 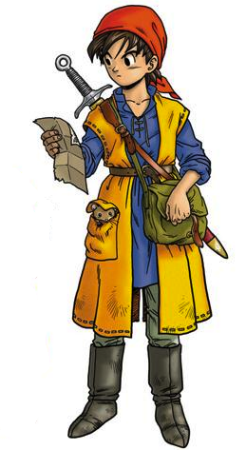 A member of Trodain's palace guard, and the sole person who survived Trodain's curse unscathed. He has a pet mouse named Munchie. Princess Medea discovered his unconscious self in the woods when they were young and they became best friends. He was taken under the care of the castle at her request and is greatly indebted to King Trode as a result, but he has no recollection of his life before these events. 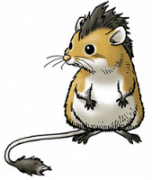 The Hero's pet mouse who lives in a pouch at the hero's side. While not seen often, he can provide some amazing support in battle thanks to the many cheeses that can be fed to him. 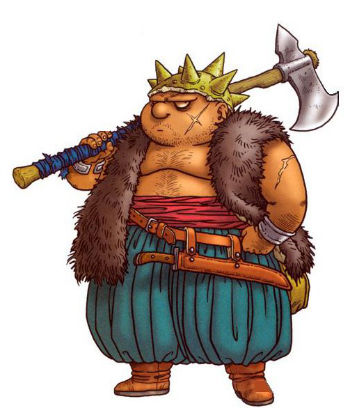 Originally a bandit from the town of Pickham, since trying to reform after the Hero saved his life.

A magician from Alexandria who is from a long line of nobles and joins up with the party after Dhoulmagus kills her older brother, Alistair. Hot-tempered and sharp-tongued, but a capable spellcaster with plenty of potential. 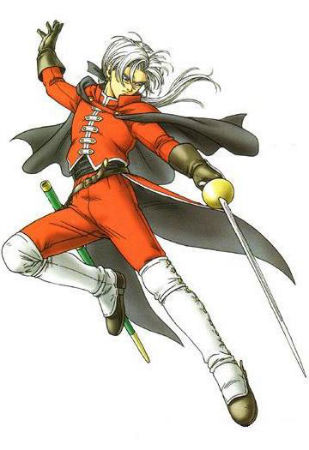 A Templar from Maella Abbey, who joins the party under orders to hunt down Dhoulmagus after the jester kills the head abbot. 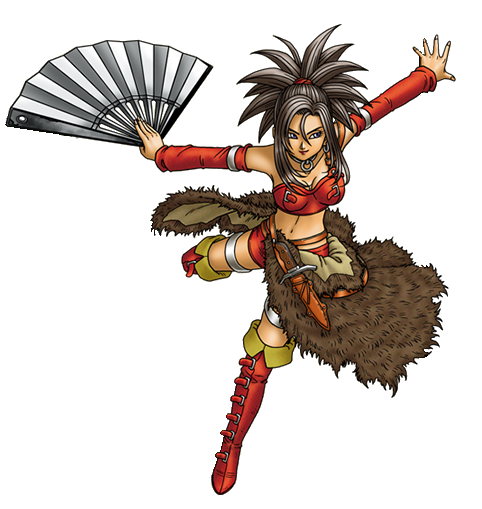 An old associate of Yangus. They have quite the history together... Originally she was just an NPC in the PS2 version of the game, but was changed to be a playable character in the 3DS version. 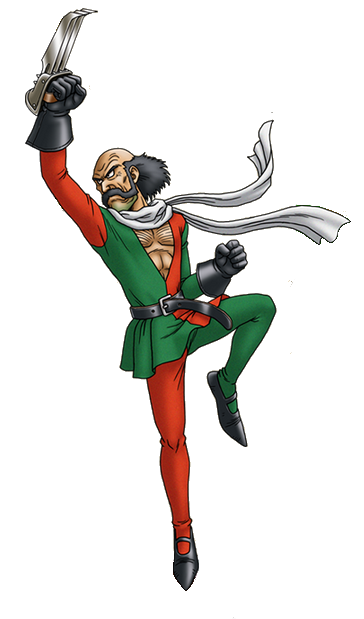 An eccentric fellow who runs a Monster Arena known as the MONSTROUS PIT, along with his assistants Marrie, Merrie, Mirrie, and Murrie. 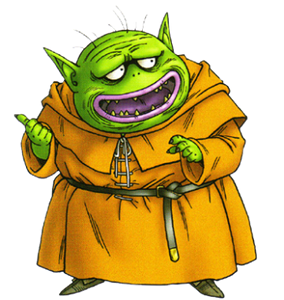 The titular "Cursed King" of Trodain, transformed into a green-skinned, troll-like creature by Dhoulmagus. Set out on the titular journey in hopes of tracking the jester down, regaining the sceptre, and restoring his kingdom and his true form. 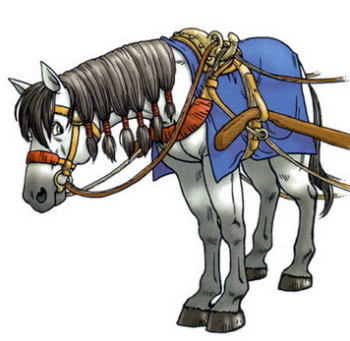 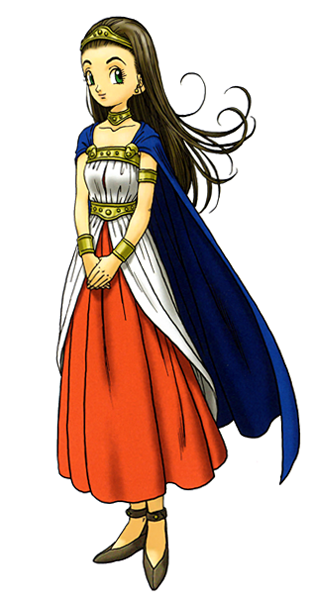 The princess of Trodain, transformed into a horse by Dhoulmagus on the very brink of her wedding to the Prince of Argonia. She uses this form to its best advantage by pulling the party's wagon.

A famous fortune teller of great skill from Faresbury, who has recently gave up his job. He recovers thanks to the party.

The lady of Alexandria, mother of Jessica and Alistair. She doesn't approve her daughter's desire of avenging the latter's death.

The king of Ascantha, whom the party helps out of a massive Heroic BSoD.

Crown Prince of Argonia, and the Prince Charmless. His father is determined to make the best possible heir out of him that he can, but it's hard when he's reluctant to perform the initiation... or anything else that requires he, uh, work.

Unlike his son, the current ruler of Argonia is a reasonable, thoughtful man just trying to do the best he can.

The keeper of the Moonshadow Land, he possesses a magical harp with the power to bring memories to life. The party meets Ishmahri twice. The first meeting is in Ascantha, where the party leads him to King Pavan to soothe his broken heart. Ishmahri creates past images of the late Queen Sasha by playing a melody on his harp. The second time involves him using his powers to restore an old ship to seaworthy condition.

A high-ranking member of the Church. He longs to become the new Lord High Priest and tries to use Marcello to fulfill his ambition.

Cash and Carrie Golding/Fougu and Yukke

The adopted twins of the late Mr. Golding, who established a fantastic casino and left them quibbling about which of them gets to run it now that he's passed on. To settle the score, they have to run a little test... one they both need help with.

Empyrea is referred to as the Godbird. She has the power to travel between worlds. The demon Gemon held her offspring's egg hostage at the top of Godbird's Eyrie. The party tries to recover it for her, but Gemon sacrificed himself to destroy the egg. Empyrea's child, who died before birth, appeared as a spirit before the heroes, and the pair decide to aid them in their quest.

Descendants of the Seven Sages (Spoilers!)
The descendants to the seven sages of the past who sealed the Dark Lord Rhapthorne. The seal cast upon the staff sealing Rhapthorne can only be broken should the descendants die.

A reknowned sorcerer and former master of Dhoulmagus. He was killed before the events of the story by his apprentice.

Jessica's older brother, who was an accomplished swordsman. Killed by Dhoulmagus before the hero could catch up with the foul jester. His death comes as a serious blow to the town of Alexandria.

The head of Maella Abbey, Abbot Francisco is compassionate, caring, understanding, and the ideal representative of everything a Saintly Church should be. One of the few members of the Abbey who hasn't dabbled in corruption... and, unfortunately, one of Dhoulmagus's targets.

The owner of the popular casino at Baccarat.

A seemingly unassuming wanderer who lives in Arcadia. He works (and is abused) by his master Dominico, who took him in when he had arrived and collapsed at Arcadia. He originally lived in Tryan Gully.

A lonely old woman living away from Orkutsk in a cabin, helping travelers traverse the cold land.

The head of the church. A respected figure among the many corrupted officials.

A vengeful magician with the appearance of a jester. He stole the magical sceptre in Castle Trodain and unleashed the curse upon the kingdom. As the party pursues him throughout the world, he begins to commit a series of systematic murders to some unknown end...

A strange, bright red Merman who has the unique distinction of being the only one of his kind to live in a freshwater environment. Ever since he was smashed over the head with a Crystal Ball years ago, he's been guarding it so he can personally confront the owner when they come for it and give them what for.

A monstrous squid with multiple personalities (one for him and each of his two main tentacles) who hates it when things pass over his head, like ships with people on them or magically-empowered clowns.

A giant black dog with a temper equal to its master, Dominico. Used by Dominico to torment David. Used by Rhapthorne to continue murdering the sages' heirs. 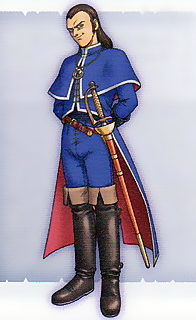 Angelo's older half-brother, who trains as a Templar at Maella Abbey. Despite being a studious monk and soldier, he harbors an old grudge against Angelo, and at times struggles with getting others to recognize his deeds because of his low-born roots.

The ghost of a former abbot, restlessly lurking in the dungeons beneath Maella Abbey in endless torment. He died during the plague and his inability to move on has been driving him mad.

A spring-loaded skeletal surprise waiting for anyone who dares to seek the Venus' Tear.

A massive mole who leads a cohort of diggers into the basement of Ascantha Castle to make off with the Moonshadow Harp just as the heroes realize they need it. Unfortunately, his musical ambitions far outsize his actual talent, much like he outsizes his diggers.

Prince Charmles' ambitions prove obnoxiously boundless when he realizes he needs put in little effort. After hunting down three Argon Lizards (an endangered species, no less) and proving dissatisfied with the spoils, the prince learns of a truly hulking lizard and immediately demands the heroes collect its gemstone core.

Legendary sailor of the seas, ol' Cap'n Crow built himself a base with a secret sea-level entrance and hid his treasure away. In the years since his passing, his old haunt has been overrun by monsters, but the treasure is free for the taking... by anyone who can pry it from his ghostly grip!

A wicked bird monster and servant of the Dark Lord who stalks the Godbird's Eyrie near Dark Empycchu. He invaded the Godbird Empyrea's nest and took her egg hostage to force her to attack the local settlement. 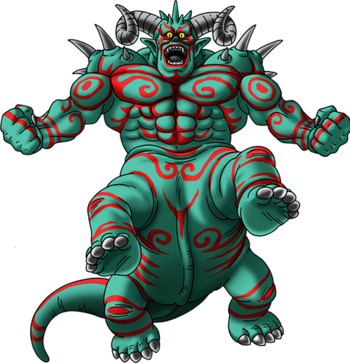 A demon that appears only in the 3DS Updated Re-release. The mightiest servant of Rhapthorne that was sealed away by the seven sages. Rhapthorne's complete revival causes the seal on Juggerwroth to weaken, which prompts the spirit of Mr. Golding to alert the heroes about it. 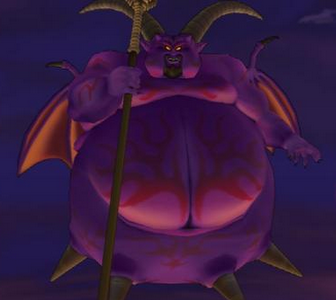 An ancient Lord of Darkness who was battled and sealed away eons ago. During the events of the game, he begins to murder the seven sages that are holding him prisoner by using the possessor of his sceptre to act as his proxy.

The party's guide in the Dragovian Sanctuary. He appears before them right as the party first enters the gate, even though he's been away from the sanctuary for twenty years. Upon learning of the fate of his people, he appeals to the party to sort out the Dragovian Lord. He knows a great deal about the party for someone they just met, and the Elder Council, of which he is a part, seems to know of The Hero.

Chen Mui's daughter, whose boundless curiosity about humans led her to leave the Dragovian Sanctuary to learn about them. Chen Mui, furious, pursued her and dragged her back to the Sanctuary, but not before she had been betrothed to a human prince named Eltrio. Eltrio pursued her, but died before reaching the gates of the sanctuary; after discovering his fate, she died in grief soon afterwards.

The most powerful of all Dragovians, almost twenty years ago he decided to abandon his Draconic Humanoid form entirely in favor of pure dragonhood. However, such a form requires immense amounts of energy, more than he could constantly provide — the ritual he used, therefore, compensated by inflicting Vampiric Draining on all of the other Dragovians. He remains apart from them, driven mad by his own power.