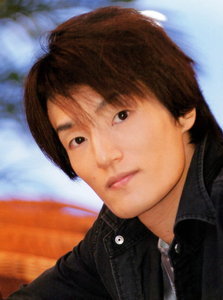 Kōki Miyata, formerly Harunori Miyata, is one of the few male seiyuus who can convincingly play the cute boy or Bishōnen archetype with the point that the first type is really voiced by a male rather than the usual shtick. This is mostly because of his uber high-pitched voice. However, he can play deep-voiced males as well.
Advertisement: